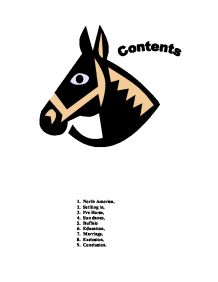 1. North America, 2. Settling in, 3. Pre Horse, 4. Sun dance, 5. Buffalo 6. Education, 7. Marriage, 8. Exclusion, 9. Conclusion. North America This harsh land was home to the native North American Indians long before Christopher Columbus discovered the new country. There native ways were somewhat disturbed when fleets of White people arrived spreading disease across the tribe's men and women. How Did they reach America It's thought that the mini-ice age formed a bridge like structure across from Russia to meet with America. The natives would have of come from Africa exploring Russia over many hundreds of years. Moving slowly upwards towards "The Bridge". Settling in The plains would be attractive along with all the coastal areas, and places rich in minerals and resources. ...read more.

The Sun dance If life wasn't hard enough the men of the tribe, normally the fitter stronger members did a tribal dance for their sacred God The Waken Tanker. The dance started with men physically connecting them selves with a piece of bone to a large rope. At the end of this you would find a very large pole like structure. The men then leant back and relaxed so the whole of their body weight was being forced onto the chest skin. This went on until the fist "victim" fainted of pain or blood loss, or the normal way the skin and flesh tore! Buffalo Object Use Raw Hide Par fleche, food stores, sacks Tanned Hide Robes, Tepee, Bags, Moccasins, leggings Shoulder Blades Hoes Horns Head Dresses, Spoons, Powder Flasks, Cups, ...read more.

There was no ceremony commonly a gift was asked for from the faience to the brides father, this was usually animals of some kind. Exposure When older members of a tribe felt to old and weak to carry on travelling around they stayed at the old camp while the other members moved on. They died but this was their wish, they were not scared of dying as they believed that the "after life" was the same as the world they had lived in before. Conclusion The north American Indians were perfectly suited to live in the harsh weather conditions that went on all those years ago but today if they were here I doubt they would live a week. Their life was completely right for their time, following the bison, tepees, marriage and death all worked perfectly. Perhaps this is why they did it. ...read more.