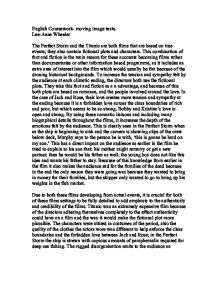 The Perfect Storm and the Titanic are both films that are based on true events; they also contain fictional plots and characters.

English Coursework- moving image texts. Lee-Anne Wheeler The Perfect Storm and the Titanic are both films that are based on true events; they also contain fictional plots and characters. This combination of fact and fiction is the main reason for these accounts becoming films rather than documentaries or other information based programme, as it includes an extra area of interest into the film which would usually be flat because of the droning historical backgrounds. To increase the tension and sympathy felt by the audience at each climatic ending, the directors both use the fictional plots. They take this fact and fiction as a n advantage, and because of this both plots are based on romance, and the people involved around the love. In the case of Jack and Rose, their love creates more tension and sympathy at the ending because it is a forbidden love across the class boundaries of rich and poor, but which seems to be so strong. Bobby and Kristina's love is open and strong. By using these romantic liaisons and including many biographical details throughout the films, it increases the depth of the emotions felt by the audience. This is clearly seen in the Perfect Storm when as the ship is beginning to sink and the camera is showing clips ...read more.

For instance, when Rose and Jack are reunited, the music fades into the compassionate theme tune, which is played stridently over the top of resonating sound of the two lovers running feet. The effect of this is to emphasise the audience's awareness of the absolute love felt between them. This use of love in each film brings conflicting thoughts into the heads of the audience. For some reason, the audience feels compassionate towards the plight of the characters, almost admiring them for their bravery in the face of danger, but in both films it was clearly the decision of the individuals themselves to undertake the journeys. In the Perfect Storm this idea is again conflicted with the audience's knowledge that most of the people are only going on the voyage to raise funds so they can support their families. In the end the feeling of the audience towards the characters within the film is one of sympathy because the characters are trying to be the people they are expected to be; to live up to standards and to push the boundaries of anticipation; to provide more for their families so that they can live a better life almost to the point of foolhardiness. ...read more.

This cutting to and from each character adds to the authenticity of each character's life as their emotions are plainly seen and have a large impact on the audience. This is also used in the Titanic, as the quartet plays out it's final ballad flashing images are shown that correspond to earlier in the film when you see the lower classes being locked below deck. The images include: two elderly people lying together on their bed saying their last goodbyes, the camera is above them to show the water rising around them; an Irish woman telling her children a bedtime story to make them sleep and try to reduce their suffering. This is almost from the perspective of the children to show how this grieves the mother: the faces of the ship stewards as they continue to try and keep the lower classes down below where they will inevitably die; Dr. Andrews standing alone on the lounge of the upper class contemplating the fate of many that he knew should this situation occur would die, the shot is sweeping and on an angle, drawing through the lounge to the dining room where the floor is completely submerged in water on which most of the furniture is floating. Throughout these clips the lighting flashes constantly or is completely cut off, surrounding the people in the darkness of their imminent expiration. ...read more.