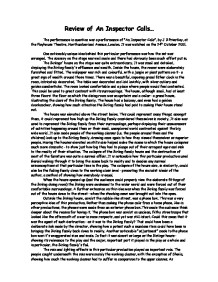 Review of An Inspector Calls... The performance in question was a performance of "An Inspector Calls", by J B Priestley, at the Playhouse Theatre, Northumberland Avenue, London. It was watched on the 24th October 2001. One noticeably unique idea behind this particular performance was how the set was arranged. The scenery on the stage was well made and there had obviously been much effort put in. The Birlings' house on the stage was quite extraordinary. It was small and detailed, displaying the Birling family's affluence and wealth. Inside the house, the rooms were elaborately furnished and fitted. The wallpaper was rich and colourful, with a jungle or plant pattern on it - a great sign of wealth around those times. There was a beautiful, imposing grand father clock in the room, intricately decorated. The table was decorated and laid lavishly, with silver cutlery and golden candlesticks. The room looked comfortable and a place where people would feel contented. This could be used to great contrast with its surroundings. The house, although small, had at least three floors: the floor on which the dining room was an upstairs and a cellar - a grand house, illustrating the class of the Birling family. The house had a balcony, and even had a golden doorknocker, showing how much attention the Birling family had paid to making their house stand out. ...read more.

They appeared during the section just after when Eric had been questioned and at the point when Eric and Sheila were being greatly affected by the inspector. They stood at one side of the stage (covering the entire of stage right) opposite to the Birling family, with Eric stood in the middle. Setting up a scene of great intensity and also curiosity, leaving the audience pondering what the idea behind that scene was and what was happening. This was an addition to the original text and quite a memorable moment. The people all seemed to be victims of the war, with the exception of the soldier (who was a partaker in the war), which could help to outline Birling's ignorance - "the Germans don't want war" - and also could be an outlook on the grim future. The people seemed to be from all different backgrounds, and seemed to cover a wide range of the world's people; representing the whole world looking at the Birlings. However, another explanation for their existence, is that they were supposed to be Eric and Sheila's conscience at this time of doubt and trauma. The people were all of the working class, perhaps encouraging the abolishment of the class system. ...read more.

It gave me a new perspective of how the play had been perceived. I had read the text and seen a televised production of the same play. All built up to give a wider perspective of how the play could have received. The playwright's ideals and hopes of a collapse of the class system had been carried through this production and had been extended on. Giving the play a refreshing, innovative depth. The collapse of the house represented the Birling's little world collapsing before their eyes and levelled them to the lower class. This introduced equality in a rather harsh and abrupt manner; however, it needed that introduction to get through to people that the upper classes would fall. That came suddenly to me and I could imagine what times must have been like. The performance used perspective in an intriguing manner that helped show how small the upper classes were, how ignorant the upper classes were and how unwilling to adapt the upper classes were. I do not feel that I was alone in enjoying the performance on the 24th October at The Playhouse Theatre and I hope that others also gained from it in a way similar to how I had been affected and in some ways enlightened about conditions of the past. I am thankful for the conditions of life nowadays... ...read more.