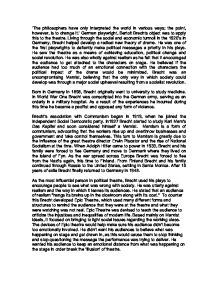 'The philosophers have only interpreted the world in various ways; the point, however, is to change it.' German playwright, Bertolt Brechts object was to apply this to the theatre.

'The philosophers have only interpreted the world in various ways; the point, however, is to change it.' German playwright, Bertolt Brechts object was to apply this to the theatre. Living through the social and economic turmoil in the 1920's in Germany, Brecht helped develop a radical new theory of drama. He was one of the first playwrights to defiantly make political messages a priority in his plays. He saw the theatre as a means of achieving education, political change and social revolution. He was also wholly against realism as he felt that it encouraged the audience to get attached to the characters on stage. He believed if the audience had too much of an emotional connection with the characters the political impact of the drama would be minimized. Brecht was an uncompromising Marxist, believing that the only way in which society could develop was through a major social upheaval resulting from a socialist revolution. Born in Germany in 1898, Brecht originally went to university to study medicine. In World War One Brecht was conscripted into the German army, serving as an orderly in a military hospital. As a result of the experiences he incurred during this time he became a pacifist and opposed any form of violence. Brecht's association with Communism began in 1919, when he joined the Independent Social Democratic party. In1927 Brecht started to study Karl Marx's Das Kapital and soon considered himself a Marxist. ...read more.

There were many different devices Brecht used in order to create this. Songs and chants, actors stepping out of character to comment upon the action, the scene moving into either the future or past, actors playing multiple characters and strange movement were all common techniques used in order to create alienation. The use of simple costumes and simple props helped to stop the audience getting attached to the characters and their surroundings. The changing of scenes would take place in front of the audience without the use of a curtain, allowing the illusion of theatre to be broken. The actors were never to become the characters they were to portray, they were instead to try and represent that character. Brechts play The Measures Taken (DIE MASSNAHME, 1930) incorporates many of his alienation techniques. Throughout this Lehrst�cke (learning play) no character is given a real name. The characters are instead named by what they do, as shown in the passage below. By not giving the characters any particular name it helps break the emotional link between the actors and the audience. It does this by continuously reminding the audience that they are watching a play. THE FOUR AGITATORS: We repeat the analysis THE FIRST AGITATOR: We must get him across the border, we said. THE SECOND AGITATOR: But the masses are in the streets. Another important alienation technique used in The Measures Taken is the characters introducing themselves before stepping into a scene. ...read more.

The message delivered in 'The Song Of Commodity' was that the merchant was just using his slaves or 'coolies' in order to gain greater profit. It showed the lack of understanding the merchant had for everything, except money and profit. Brecht's work was not successful in achieving what he desired it to achieve. He wanted to use the theatre to change the world and spread the Marxist belief of workers overthrowing businesses and government and taking control themselves. His message however did not reach the people he wanted it to; the working class, the party and the east. It was instead seen by those he claimed to detest; the poets, the intellectuals and the west. Through not gaining the admiration of his target audience there was very little social action taken as a result of Brecht's plays. Brecht's techniques were successful however in that he created a very popular form of theatre which is still being used to this day, such as in Laboites production of 48 Shades Of Brown. Certain techniques Brecht developed are evident throughout this production. These techniques include slow motion, freezing of scenes and actors stepping out of character to directly address the audience. There are many more plays that incorporate Brecht's techniques, similarly to 48 Shades Of Brown. Modern Brecht plays have been translated into forty two different languages and played all over the world . Although Brecht was not successful in what he desired to achieve, he is still a great success for his development of a new and radical theory of drama, Epic Theatre. ...read more.