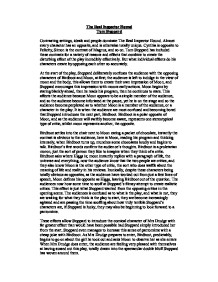 The Real Inspector Hound Tom Stoppard Contrasting settings, ideals and people dominate The Real Inspector Hound. Almost every character has an opposite, and is otherwise totally unique. Cynthia is opposite to Felicity, Simon is the contrast of Magnus, and so on. Tom Stoppard has included these contrasts for a variety of reasons and effects that combine to create the disturbing effect of the play incredibly effectively. But what individual effects do his characters create by opposing each other so accurately. At the start of the play, Stoppard deliberately confuses the audience with the opposing characters of Birdboot and Moon, at first; the audience is left to indulge in the view of moon and the body, this allows them to create their own impression of Moon, and Stoppard encourages this impression with moons early actions. Moon begins by staring blankly ahead, then he reads his program, then he continues to stare. This affects the audience because Moon appears to be a simple member of the audience, and so the audience become infuriated at the pause, yet he is on the stage and so the audience become perplexed as to whether Moon is a member of the audience, or a character in the play. It is when the audience are most confused and becoming bored that Stoppard introduces the next part, Birdboot. ...read more.

With these stereotypical characters Stoppard has extended the contrast to actions. Of course after this embrace, Stoppard explains nothing and enters instead Magnus, Simon's opposite. Magnus comes hurtling downstairs and crashes into Simon in his wheelchair. The audience probably find this intensely amusing because they have been building up an intense hate of the stupid predictable Simon because f his success with Cynthia and Felicity. They also, if they haven't taken in the more obvious evidence, note the fact that Magnus and Simon are obviously opposites. The more obvious evidence is that Simon is wearing a posh suit, is cool as an Eskimo, speaks with a "decent" English accent and has considerable success with his female stereotype counterparts. Magnus is older, in a wheelchair and wear blankets; he speaks in an American accent and is a psychopath. The contrast should be obvious to the whole audience; it is not of course to the critics. This could be explained by severe stupidity, or another stereotypical taunt at critics in general, but Stoppard does give an explanation. The critics no longer care. By this time, Birdboot is becoming obsessed with Cynthia and Moon is drowning in his thoughts. Both of these actions are the beginning of the mix of the critic's world and the play, although at this point only Birdboot's obsession shows. ...read more.

Why, otherwise, would Moon be shouting across the stage? Eventually the scene ends, Moon talks to Birdboot, and Birdboot begins to pace neurotically up and down the stage. He, predictable, comes across the corpse. He points out that it is Higgs, this is unpredictable, and catches the audience by surprise, what is Higgs doing there? They think, they begin to wonder whether it was Moon. Moon begins to believe he did himself, and then Birdboot is shot. He comes onto the stage and once again, the plays have merged whilst the audience were off their guard. Moon takes the role of Hound. At this point Hound and Simon occupy the Critics seats, the plays are now almost totally merged. The play is ready, Magnus unveils himself in all his glory, he is the real inspector Hound, Albert, and most importantly Puckeridge. Only Moon and the audience know, and seeing as Magnus had successfully framed Moon for the murder, going so far as to convince Moon himself of Moon's guilt. He shoots Moon takes Cynthia, and presumable lives happily and evilly ever after. The actors are totally flummoxed and their two dimensions are suddenly apparent. Now the audience are in the know, and the actors are ignorant. The audience want to scream at them. The contrasts at this point no longer matter, they have been Broken, and this break subconsciously makes the audience realise it is the end of the play. ...read more.