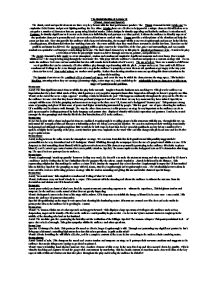 The Resistible Rise of Arturo Ui

The Resistible Rise of Arturo Ui (Visual, Aural and Spacial) The visual, aural and spacial elements are three very key factors with the final performance product. The Visual elements include; Make-up: To emphasise facial feature and prevent lighting making the face shine. Masks; these are effective to help provide a unique character identification or to categorise a number of characters into one group using identical masks. This technique is visually appealing and holds the audience's attention well. Costume; is visually significant as it creates each characters individuality and portrays a set time period. It allows the audience to identify aspects of that particular character's personality and can very often add serious or comical value. Props; provide a wider picture of the situation and help the actors get into role. They also provide the audience with character information, for example within scene two Dogsborough and son are in the kitchen cleaning glasses, this shows their therefore working class as is they were middle class they would have servants to do that for them. Therefore social position and status is achieved. The Scenery and Set; within a play conveys the visual idea of the time, place and surroundings, and can contain semiotics to symbolise and interpret certain things in theatre. The final visual element key to this play is physical performance style. ...read more.

This is a good use of space showing the audience Ui's mobility and freedom to walk through. The way the other characters react to his presence on stage is very important as the audience are ale to pick up on negative feelings portrayed by body language and posture also displayed visually with facial expression and gestures. Tension is created amongst the two groupings and visually this is the first introduction of Ui to the audience. Scene two: Scene two begins with a visual and spacial element combined. Dogsborough is washing glasses in his restaurant with his son. Through this we can understand the strength of him and his son's relationship as they are doing a servant job together. We can also understand their working class family background and although Dogsborough has little wealth he is well respected and that doesn't mean his position in society is low considered he's spoken of highly in the opening of the play. Aural; Butcher puts extra emphasis on the word 'this' and this changes his pitch and tone and is effective to get a point across. Scene three: Aural; racing news on the radio creates the atmosphere on stage. We can learn from this that their gamblers and this possibly suggests their personalities to be very determined and self-indulgent. Visual: Whisking through the newspaper. ...read more.

begin to relate to her as she's just a normal character caught up in the middle of the shooting who has lost her husband. Aural: The machine gun fire- portraying the brutality and the realisation of the killings. Spacial: The woman collapses. This portrays minimal lack of space due to lack of strength. This gains sympathy within the audience and raises questions. Scene Ten: Spacial: Ui slumped in chair. This portrays his mood as Givola forges Dogsborough's will. Through not possessing any significant posture he isn't living up to his usual controlling high status therefore this raises questions. Is guilt on his mind? Visual: Givola is writing the will this is effective, as it is a complete contrast of the scene before revealing to the audience their conniving nature. Scene eleven: Aural: Sound of rain. This dampens the mood and creates tension and suspense on stage as it portrays their nervous emotions and suggests to the audience that maybe things aren't going to go ahead as planned. Visual: Inna's trembling hand shows immense fear. Another element of this scene is the men lined up and then mowed down by gunfire. This is visually shocking and captures Ui and the gang's sick contentment by murdering. This is a harsh contrast of emotions and a clear reflection of the key aspects with selfish and violent acts that take place throughout the play and leaving the audience in disbelief. ...read more.