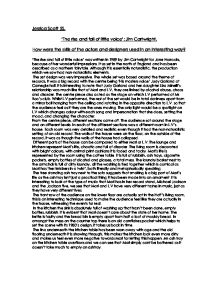 'The rise and fall of little voice': Jim Cartwright - How were the skills of the actors and designers used in an interesting way?

Jessica Scott 5S. 'The rise and fall of little voice': Jim Cartwright. How were the skills of the actors and designers used in an interesting way? 'The rise and fall of little voice' was written in 1989 by Jim Cartwright for Jane Horrocks, because of her wonderful impressions. It us set in the north of England and has been described as a northern fairytale. Although it is essentially naturalistic, the production which we saw had non-naturalistic elements. The set design was very impressive. The whole set was based around the theme of records, it was a big record with the centre being 'His masters voice' Judy Garland at Carnegie hall. It is interesting to note that Judy Garland and her daughter Liza Minelli's relationship was much like that of Mari and L.V, they are linked by alcohol abuse, chaos and disorder. The centre piece also acted as the stage on which L.V performed at Mr. Boo's club. Whilst L.V performed, the rest of the set would be in total darkness apart from a mirror ball hanging from the ceiling and rotating in the opposite direction to L.V. so that the audience feel as if they are the ones moving. ...read more.

We don't actually see into Mari's bedroom as there is no need, we have seen the sordid sex and filth that goes on in the living room so we can only imagine what takes place in the bedroom. Instead of going into detail with Mari's bedroom as has been done for every other, all that we see is a window gobo on the floor. It is interesting, having studied the Hoff house to compare all the other rooms with L.V's bedroom. We can see just how different she is from her mother just by looking at her bedroom. It is raised up off the floor to show separation and it is very tidy. All she has in the room are records, her bed and her wardrobe. We can tell from looking at the room that music in L.V's life. The curtains at L.V's window are always drawn; she only ever peeks out of them. This shows how she is cut off from the outside world. When she peeks out of the window we can see a bright day outside, we can see back to back red bricked terraced houses, giving us a sense of place. ...read more.

The way she smooths her hair back off her face and then rubs her hands down her trousers slowly, the way in which everything is spotless in her room and she always cleans her records before plying them. All these things are a symbolic representation of obsessive compulsive disorder. We get the feeling that L.V just wants to disappear, her music is her only escape from the world and her voices make her feel better, make her feel as if she is somebody else. Physically L.V is tiny, this is emphasised with the use of big baggy clothes. She has little girls pyjama's and takes tiny quick steps like she is scared. It is as though she is even afraid of herself, we see her get changed in her bedroom: she is in her own company but still is careful, doesn't show her body, doesn't look at her body. The contrast between the real L.V and L.V as a singer is immense. One minute she is this tiny girl who is vulnerable and timid and as soon as she steps onto the stage she is somebody else, she is whoever she is impersonating. She is bright and sexy, a performer. In conclusion the efforts of the designers and the actors combined made an excellent performance. ...read more.