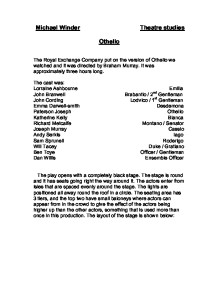 The Royal Exchange Company put on the version of Othello we watched and it was directed by Braham Murray. It was approximately three hours long.

Michael Winder Theatre studies Othello The Royal Exchange Company put on the version of Othello we watched and it was directed by Braham Murray. It was approximately three hours long. The cast was: Lorraine Ashbourne Emilia John Branwell Brabantio / 2nd Gentleman John Cording Lodvico / 1st Gentleman Emma Darwell-smith Desdemona Paterson Joseph Othello Katherine Kelly Bianca Richard Metcalfe Montano / Senator Joseph Murray Cassio Andy Serkis Iago Sam Sprunell Roderigo Will Tacey Duke / Gratiano Ben Toye Officer / Gentleman Dan Willis Ensemble Officer The play opens with a completely black stage. The stage is round and it has seats going right the way around it. The actors enter from isles that are spaced evenly around the stage. The lights are positioned all away round the roof in a circle. The seating area has 3 tiers, and the top two have small baloneys where actors can appear from in the crowd to give the effect of the actors being higher up than the other actors, something that is used more than once in this production. The layout of the stage is shown below: A single blue light comes up and the audience find Roderigo and Iago rushing onto the stage. Their faces are white and Iago is making very un-comfortable movements, showing he is on edge about something. A blue light is used to signify the cold and damp weather. ...read more.

He also makes good use of talking to the audience to increase the dramatic irony of the play. The whole play is full of dramatic irony, and there are points when the suspense of the other characters finding out the truth becomes unbearable, this increases the pleasure of watching the play. When the actors arrive at Cyprus the whole colour scheme of the play changes. The floor changes from the green wet tarpaulin of Venice to the beige, dry, rough almost stony floor for Cyprus. This is not the only change though. In connection to this, the main characters also change their costumes. Instead of the rather bright green uniforms they were wearing in Venice, they, like the floor, change to a much more subtle beige/cream colour. When they play has moved to Cyprus not only does the floor material and texture change but the way it is set out does also. As the stage is in a circle the material covering it is also in a circle and it has ropes running from the out side to the centre which when vied from above look almost like a spiders web. This could represent the web of lies and depict that is in Cyprus, and in the end scene Desdemona kneels in the middle of the "web" and prays, this could be represent the way she has been caught up in the middle of it all. ...read more.

One thing that was notable was the fact that not many of the actors had make-up on. In the first act it did look like Iago had some white powder on his face to make him look pale, but apart from that the make-up was kept to a minimum. One reason for this I think could be because the actors were working in such close proximity with the audience if they had too much make up on then it would be too obvious to the audience. The sound effects used during the play were minimal, hinting only at things that were going on in the distance. This I believe was to help the audience distinguish exactly where the scene was taking place, an example of this was when the play moved to Cyprus, and faint cricket noises could be heard. The lighting was very effective in the play, not only was it used to illuminate the stage, the lighting was used to reflect the mood being conveyed by the actors, this was apparent, towards the end of the play when the rage of Othello was growing and he was becoming more and more insane having realising what he has done. The lighting effect moved from "cool blue" through to a "blood red" Used to interpret the change in his character which went from being a happy and optimistic person to a crazy, broken and twisted man. The dramatisation was effective in bringing alive the characters to unfold the story in a strong and developing format. ...read more.