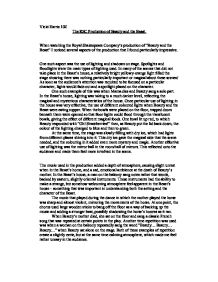 The RSC Production of Beauty and the Beast.

Vicki Harris 10Z The RSC Production of Beauty and the Beast. When watching the Royal Shakespeare Company's production of "Beauty and the Beast" I noticed several aspects of the production that I found particularly impressive. One such aspect was the use of lighting and shadows on stage. Spotlights and floodlights were the main types of lighting used. In many of the scenes that did not take place in the Beast's house, a relatively bright yellowy-orange light filled the stage showing there was nothing particularly important or magical about these scenes/ As soon as the audience's attention was required to be focused on a particular character, lights would fade out and a spotlight placed on the character. One such example of this was when Mama dies and Beauty sang a solo part. In the Beast's house, lighting was taking to a much darker level, reflecting the magical and mysterious characteristics of the house. Once particular use of lighting in the house was very effective, the use of different coloured lights when Beauty and the Beast were eating supper. When the bowls were placed on the floor, trapped doors beneath them were opened so that floor lights could flood through the translucent bowls, giving the effect of different magical foods. ...read more.

After a time, the family lay down in the 'mud' and the chorus sat up, cradling the cast in their arms as a way of showing acceptance from the family and the countryside that this is how things were going to be. When this was got rid of, a house folded up from the floor that used two panels from the floor as the roof and thing, what looked like wooden, panels for the walls. This use of thin materials for the house was a direct symbol of the family's situation and, although the house was very simple, it had a certain fairytale-cottage-like look about it. The Beast's palace was far more extravagant and impressive than the family's cottage. When the father first went into the house big bamboo sticks bowed down from the ceiling, with lights inside. This gave a striking, slightly imposing entrance to the palace and led to a circular doorway at the back of the stage that was blacked out, creating a sensation of mystery and curiosity. When Beauty went into the palace, and we saw her room, the swing that had carried to the family to the countryside had now turned into a four poster bed, with pink covers, which swung to help relax Beauty and make her feel more welcome. ...read more.

We are meant to feel sympathy for Beauty, and we do because she looks so pure and innocent in her dress, however if she were in a black dress this feeling may not have been stirred as our basic minds associate white with good and black with bad. Lighting and costume also worked together well, such as in the witch's costume. The headdress was very elaborate and when the lights shone onto her, a huge shadow fell on a section of the stage. The imposing shadow, with the spikiness and movements made me feel quite unnerved and was an impressive way of showing that she has high importance and power. Every one of the aspects I have discussed came together in the Beast's house. The overall effect was only created well by using suitably magical lighting, the creepy voices and instruments, a good set or in some cases using the chorus line to create the feeling of magical furniture, and costumes that gave us an insight into the character, such as Beauty's dress or the Beast's costume, whilst also serving well in the purpose of making the play feel alive. This mix of all the different aspects came together to create an aura of a mystical and scary palace. ...read more.