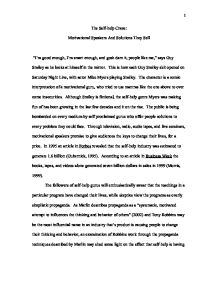 The Self-help Craze: Motivational Speakers And Solutions They Sell

The Self-help Craze: Motivational Speakers And Solutions They Sell "I'm good enough, I'm smart enough, and gosh darn it, people like me," says Guy Smiley as he looks at himself in the mirror. This is how each Guy Smiley skit opened on Saturday Night Live, with actor Mike Myers playing Smiley. The character is a comic interpretation of a motivational guru, who tried to use mantras like the one above to over come insecurities. Although Smiley is fictional, the self-help genre Myers was making fun of has been growing in the last few decades and it on the rise. The public is being bombarded on every medium by self proclaimed gurus who offer people solutions to every problem they could face. Through television, radio, audio tapes, and live seminars, motivational speakers promise to give audiences the keys to change their lives, for a price. In 1995 an article in Forbes revealed that the self-help industry was estimated to generate 1.6 billion (Gubernick, 1995). According to an article in Business Week the books, tapes, and videos alone generated seven billion dollars in sales in 1999 (Morris, 1999). The followers of self-help gurus will enthusiastically swear that the teachings in a particular program have changed their lives, while skeptics view the programs as overly simplistic propaganda. As Marlin describes propaganda as a "systematic, motivated attempt to influences the thinking and behavior of others" (2002) and Tony Robbins may be the most influential name in an industry that's product is causing people to change their thinking and behavior, an examination of Robbins work through the propaganda techniques described by Marlin may shed some light on the effect that self-help is having on its audience. This essay will explore the factors which lead to the rise of motivational speakers, and examine Robins' Awakening The Giant Within to identify the use propaganda techniques outlined by Randal Marlin. Through looking at the rise of the industry, and some of the tools they may use to entice people to follow ...read more.

With sales experience and exposure to motivational speaking, Robbins may have been able to learn how to speak, but being charismatic and articulate does not make a person an expert. Although he began as a self promoter, his philosophies are now praised by many who believe in his teachings. His secret is that most of his teachings are not his. Robbins does not hide the fact that his formal education stopped after high school, in fact he is able to use this fact to reach more people. He also acknowledges that most of methods and philosophies he is teaching are not his, but bits and pieces from different successful people around the world. In Robbins' presentations he is both the preacher and the star pupil. He uses his own success as testimony for the effectiveness of the products he is trying to sell. The 90 minute audio book Awaken The Giant With In, uses the analogy that every person has a giant spirit, or a greater potential that they must live up to. It tells them that his great potential is lying dormant inside them, waiting to be called to action. Robbins uses many analogies for unfulfilled potential, sometimes it is a sleeping giant, and sometimes it is a locked door. No matter what form the potential takes, Robbins has the alarm clock, and he has the key, and he is just bursting to share them with his followers. Through these analogies and bold statements of promises and guarantees, Robbins feeds into the primary need for happiness and improved living conditions, which are two "pre-existing wants" discussed by Marlin. Polls and market research are also used in designing the programs to discover how best to reach the audience. Because this preparation is not scene by the general public it sounds like the speech has been tailored to the individual, and an illusion of intimacy further persuades people that these products may provide the answers that they were looking for. ...read more.

In 1994 News Magazine reported that the province of Alberta paid for 25 young offenders to take the 'Unlimited Power' seminar. When the youths were interviewed a few months later most of them had not made positive changes, but a few of them did report a short lived desire to change. When writer Art Levine followed Tony Robbins 30 day program and did not notice an improvement, he decided to go find Robbins and investigate why the program didn't work for him. Robbins' response was "You don't feel bad enough to change" (1997). This reveals an odd polarity in Robbins' philosophy because it appears that a person will only be motivated to adopt his positive messages, only if their own messages are so negative that they must be replaced. Therefore it seems that people may be drawn towards Robbins not because they are very fond of him, but because they are not fond of themselves. The self-help craze has grown at staggering rates in the past few years. This could result from a growing public interest in awareness and a drive to be better people. It could also be a sign that people are feeling lost or empty. Whatever the reason people are reaching out there to be inspired and there is an increasing number of people ready to offer themselves as inspiration. No matter what the product we must remember to be critical and informed consumers and remember that the man with the message is the product. He does stand to gain from the transaction and people must be critical of what they are receiving because some tools may help, and others may not. In the end, life cannot be reduced to a series of slogans and the challenges we face cannot be solved by prescribed steps. Before buying into the philosophy of any new age gurus and embarking on a mission to change we may want to take a lesson from Guy Smiley, by looking into a mirror and reminding ourselves that "I'm good enough, I'm smart enough, and gosh darn it people like me". ...read more.