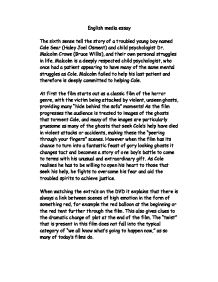 English media essay The sixth sense tell the story of a troubled young boy named Cole Sear (Haley Joel Osment) and child psychologist Dr. Malcolm Crowe (Bruce Willis), and their own personal struggles in life. Malcolm is a deeply respected child psychologist, who once had a patient appearing to have many of the same mental struggles as Cole. Malcolm failed to help his last patient and therefore is deeply committed to helping Cole. At first the film starts out as a classic film of the horror genre, with the victim being attacked by violent, unseen ghosts, providing many "hide behind the sofa" moments! As the film progresses the audience is treated to images of the ghosts that torment Cole, and many of the images are particularly gruesome as many of the ghosts that seek Cole's help have died in violent attacks or accidents, making these the "peering through your fingers" scenes. However when the film has its chance to turn into a fantastic feast of gory looking ghosts it changes tact and becomes a story of one boy's battle to come to terms with his unusual and extraordinary gift. ...read more.

The most important of these nominations is, to me, the best original screenplay nomination, as I intend to compare the effectiveness and originality of the "twist" in this film to another movie titled "The Life of David Gale". At first glance it may seem strange to compare these films to one another, as they appear to be completely different, however they both have unpredictable and effective "twists" at the end. The Life of David Gale is a film based around the politics of the death penalty, but for the sake of this article, I shall be looking into the story line of the film. David Gale (Kevin Spacey), is a college professor and an anti-death penalty protestor who used to belong to a group called Deathwatch ironically finds himself on death row for the r**e and murder of fellow protestor Constance Hallaway (Laura Linney). Three days before his scheduled meeting with a lethal cocktail, Gale agrees to three two-hour interviews with magazine reporter Bitsey Bloom (Kate Winslet). However it turns out to be slightly more than that as Bitsey ends up in a race against time to prove the innocence of the man she was once certain had committed the crime. ...read more.

So both of these films have one thing in common, an unexpected ending and both are extremely effective on the audience. Neither could be easily predicted when watching the films the first time round, though both lose their appeal slightly once they have been viewed, as once it has been revealed it just turns into a "but we all know he's dead" or "we know what happens anyway" type of film. First time around both of these films have the audience on the edge of their sits, The Sixth Sense, with its typical horror scenes of evil ghosts and sprits, and The Life of David Gale, with its race against time at the end. Both films are touching on sensitive issues and both have a strong impact on emotions. Both of these films have power to reduce an audience to tears, showing the depth and impact of each individual film. I wouldn't be able to choose between them, as both are highly effective and I can not single out either as being better than the other, both achieve originality and are they are equally unpredictable. ...read more.