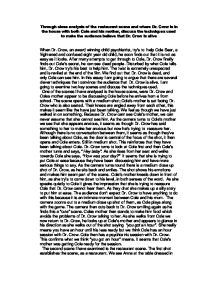 The Sixth Sense. Through close analysis of the restaurant scene and where Dr. Crow is in the house with both Cole and his mother, discuss the techniques used to make the audience believe that Dr. Crow is alive

Through close analysis of the restaurant scene and where Dr. Crow is in the house with both Cole and his mother, discuss the techniques used to make the audience believe that Dr. Crow is alive When Dr. Crow, an award winning child psychiatrist, try's to help Cole Sear, a frightened and confused eight year old child, he soon finds out that it is not as easy as it looks. After many attempts to get through to Cole, Dr. Crow finally finds out Cole's secret, he can see dead people. Disturbed by what Cole tells him, Dr. Crow try's his best to help him. The twist is extremely unexpected and is reviled at the end of the film. We find out that Dr. Crow is dead, and only Cole can see him. In this essay I am going to argue that there are several clever techniques that convince the audience that Dr. Crow is alive. I am going to examine two key scenes and discuss the techniques used. ...read more.

As she speaks quietly to Cole it gives the impression that she is trying to reassure Cole that Dr. Crow cannot hear them. As they chat she makes up a silly story to put him at ease. The audience don't expect Dr. Crow to have anything to do with this because it is an intimate moment between Cole and his mum. The camera zooms out to a medium close up shot of them, as Cole plays along with the game. The camera then cuts back to Dr. Crow smiling again as he finds this a "cute" scene. Coles mother then stands to make him food which avoids the problems of Dr. Crow talking to her. As she walks from Cole we now return to Dr. Crow, he looks up at Cole's mother and appears to glance in his direction as she walks out of the shot saying "you got an hour". She really means you have an hour until his teas ready but we think Cole has an hour session with Dr. ...read more.

Crow shakes his head and leans back, "I think it might be some kind of abuse..." he continues to discuss the case with Anna. Here we move into an interview shot. This suggests that she's listening to him but also moves the focus away from Anna and onto Dr. Crow. The conversation continues but Anna never speaks. She's still annoyed and Dr. Crow is dominating the conversation anyway. A waitress walks past the table, placing the bill on the table. She faces Anna. Dr. Crow tries to take the bill, but Anna gets it first and writes a cheque. It looks like Anna is snatching the bill away from him because she is still angry. Anna sighs heavily then looks up saying "Happy anniversary". It appears that she is being sarcastic and moody, when really she is upset and emotional. She is clearly upset and gets up and leaves without another word. She appears to be storming off when in reality she is just leaving. In the above essay I have explained clearly and it detail the techniques used in the two scenes. ...read more.