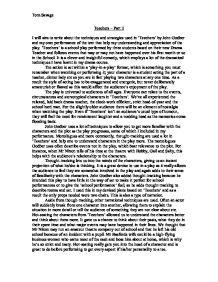 The techniques and strategies used in 'Teechers' by John Godber and my own performance of the text.

Teechers - Part 2 I will aim to write about the techniques and strategies used in 'Teechers' by John Godber and my own performance of the text that help my understanding and appreciation of the play. 'Teechers' is a school play performed by three students based on their new Drama Teacher and follows events that may or may not have happened over his first month or so in the School. It is a clever and insightful comedy, which employs a lot of the dramatical techniques I have learnt in my drama course. The action is set within a 'play-in-a-play' format, which is something you must remember when watching or performing it; your character is a student acting the part of a teacher, dinner lady etc so you are in fact playing two characters at any one time. As a result the style of acting has to be exaggerated and energetic, but never deliberately amateurish or flawed as this would affect the audience's enjoyment of the play. ...read more.

For instance, when Mr Nixon tells of his time at the theatre with Hobby, Gail and Salty, this helps with the audience's relationship to the characters. Thought-tracking lets us into the minds of the characters, giving us an instant projection of what he/she is thinking. It is a great devise to use in a play as it really allows the audience to feel they are somewhat involved in the play and again adds to their sense of familiarity with the characters. John Godber also added thought-tracking because he intended this play to have little in the way of set to make it perfect for school performances or to give the 'school performance' feel, so he adds thought-tracking to describe rooms and set. I used this in my devised piece based on 'Teechers' and as a result the only props needed were two chairs. This is also a type of narration. ...read more.

which would enhance our performance. Multi-role acting is a good device because it allows you to have a lot of characters with a small cast. It is also a good chance to show your acting skills as you really have to define each character with voices, facial expressions, signature movements and costume. There was little in the way of costume and props as scene/character changes occur so often. A costume may just consist of a blazer you can take off in a second, maybe with a hat or something. Props would be things like class-room chairs, tables etc, anything schoolish. We linked our scenes with still images and prop moving; one scene would be linked by actors moving props (like chairs and tables) across the set. Still images are good because you can highlight important parts of the plot and link scenes using them. 'Teechers' is a great play, which really gets the audience involved and into the plot. It would be great at a theatre or as a school play, a funny family comedy. Tom Savage ...read more.