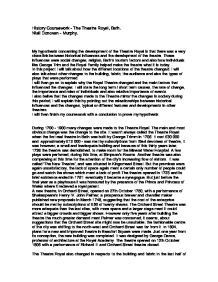 History Coursework - The Theatre Royal, Bath. Niall Donovan - Murphy. My hypothesis concerning the development of the Theatre Royal is that there was a very close link between historical influences and the development of the theatre. These influences were social changes, religion, Bath's tourism factors and also how individuals like George Trim and the Royal Family helped make the theatre what it is today. In this project I will talk about how the different locations of the theatre changed. I will also talk about other changes to the building, fabric, the audience and also the types of plays that were performed. I will then go on to explain why the Royal Theatre changed and the main factors that influenced the changes. I will state the long term / short term causes, the rate of change, the importance and roles of individuals and also relative importance of events. I also belive that the changes made to the Theatre mirror the changes in society during this period, I will explain this by pointing out the releationships between historical influences and the changes, typical or different features and developments in other theatres. I will then finish my coursework with a conclusion to prove my hypothesis. During 1700 - 1900 many changes were made to the Theatre Royal. ...read more.

Early in 1814 several alterations and improvements were carried out at Beaufort Square. The box office was enlarged, and much of the interior of the theatre was repainted in light green and gold. The Casali panels were restored, and the ceiling which provided their elegant background assumed a delicate shade of pink. Green velvet drapery, edged with gold. The interior of the theatre at the time represented how Geogian Bath, socailly, was improving due to the fact it was fashionable and with a very high rate of tourism Bath that was making it become a very rich and prosperous city. On the morning of Good Friday 1862 a fire broke out and completely destroyed most of the theatre in Beaufort Square. It was proposed that a limited liability company should be formed, with a capital of �12,000 in �5 shares to rebuild the theatre on the shell of the old one, making use of the walls that remained, and retaining the essentially Georgian character of the original building. Changes were made to the type of plays that were shown and this reflected in the audience. Georgian Bath peaked at around 1840, by then bath was one of the most fashionable places to live and visit. In 1700 Bath was still a town with narrow streets and cramped buildings and around 3,000 inhabitants. ...read more.

The boxes which face the audience rather than th stage illistrate how theatre was seen as a place to be seen as it was in fashion. And when the theatre threatened to close due to the Victorian depression where religous feeling were te theatre is sinfull and Bath was no longer fashionable. Fashion and religion influenced the changes of the theatre greatly because it dictated weather or not peolple would go to theatre. In the 1800's it was fashionable and acceptable and in the 1900's it was unfashionable and looked down upon by religion. Typical features of the theatres in Bath has been how they have made a steady improvement from 1705 to now, changes to the site, building and external factors like social changes has made sure Theatre in Bath has progressed with the times. The atypical factor that has amazed me is how quickly the changes have taken place, from 1705, Bath had a non-excistant theartre reputation and within 100 years became the first Royal Theatre outside of London. Not long after the Royal Theatre in Bath recieved a royal patent, a small theatre in Yorkshire got one aswell and many other theatres in Britain changed, evolved and improved. Including the masive one in Covent Garden, London. Using the available evidence I can prove my hypothesis as outlined in my introduction; there was a very close link between historical influence and development of the theatre. ...read more.