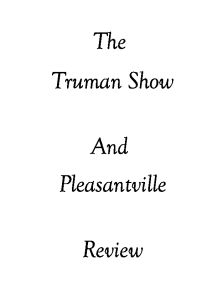 The Truman Show And Pleasantville Review

The Truman Show And Pleasantville Review The Truman Show, a comedy/ drama was directed by Peter Weir (nominee for Best Director in 1998, Academy Awards). The film was scripted by Andrew M. Niccol, including last years "Gatttaca," a similarly themed tale, Niccol delivers optimism and affection for the human condition. Jim Carry plays the role of Truman Burbank who is a charming and unwitting star, the world's most popular, 24 hour non-stop soap called 'The Truman Show'. Pleasantville is a winsome and witty comedy/ drama starring Tobey Maguire as 'David' and Reese Witherspoon as 'Jennifer'. This film is the work of director Gary Ross, known for 'Big' and 'Dave' who both won him Oscar Nominations. Any film that has a concept of 'fly on the wall' is bound to get streams of people flowing into the cinema; this is the concept that was used during the Big Brother series which was a success; this is also the same case with both the films, Pleasantville and The Truman Show. Both the films have a comedy based genre making it fun and enjoyable and they both contain reality TV themes, being stars of TV shows in quaint and not so quaint hometowns. The opening sequences of both films are confusing and not much is actually revealed to the audience and so they are left in uncertainty of what the storyline truly is. ...read more.

r****m was part of the film when the Pleasantville community were separated into coloured and non-coloured communities just because they were afraid to mix. From r****m, hatred started to grow within the people and the society became 'evil'. The main storyline for The Truman Show is a life story of Truman Burbank (Jim Carrey) who is the star of a reality TV show, but he doesn't know that everything around him is fake, including the people closest to him. We soon learn that there are other doubts in Truman's heart, a lost love Sylvia (Natascha McElthone) - a girl who tries to reveal the reality to him before being mysteriously transported to 'Tahiti'. It was this lost love that drove him to discover the truth about the world he lived in. The main themes expressed in this film are romance/love, adventure, truth and reality. These main themes are completely different to Pleasantville's themes. Music is used in Pleasantville as a way of showing when people started to change, emphasizing that something special was happening, they stated listening to pre-rock 'n' roll 50's music and therefore the characters started to become more open minded, and the music also gives us an idea of the year. In The Truman Show music was used effectively by changing with the emotions within the scenes and by dramatizing the characters emotions. ...read more.

In The Truman Show the opening sequence and the beginning was rather slow and it was difficult to follow as it gave certain hints at the beginning of it being a TV show and there were different shots of the characters doing their own thing and talking, e.g. Truman playing with the soap in the bathroom and Meryl talking about how The Truman Show was her life. I think that Pleasantville will attract teenagers as an audience. They'd probably like the film because there are teenagers involved in the film but might have found it a bit boring during the black/white periods but started to get a bit more interested when it was in colour. A good point about the film is that it keeps the audience in suspense and this is what teenagers like and enjoy. They can also see how the teenagers in the 50's were like and for them to establish the differences between now and then. Although teenagers might not have been the target audience for The Truman Show it would interest them because of Jim Carrey who is known as a comedian and also because they like the aspect of live TV and looking at someone continuously. On the whole I think that both films were beautifully produced, directed and acted. 2 ...read more.