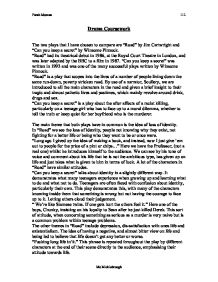 The two plays that I have chosen to compare are &quot;Road&quot; by Jim Cartwright and &quot;Can you keep a secret&quot; by Winsome Pinnock.

Drama Coursework The two plays that I have chosen to compare are "Road" by Jim Cartwright and "Can you keep a secret" by Winsome Pinnock. "Road" had its theatrical debut in 1986, at the Royal Court Theatre in London, and was later adapted by the BBC to a film in 1987. "Can you keep a secret" was written in 1993 and was one of the many successful plays written by Winsome Pinnock. "Road" is a play that scopes into the lives of a number of people living down the same run-down, poverty stricken road. By use of a narrator, Scullery, we are introduced to all the main characters in the road and given a brief insight to their tragic and almost pathetic lives and pastimes, which mainly revolve around drink, drugs and s*x. "Can you keep a secret" is a play about the after affects of a r****t killing, particularly on a teenage girl who has to face up to a moral dilemma, whether to tell the truth or keep quiet for her boyfriend who is the murderer. ...read more.

A lot of the characters in "Road" have similar attitudes. "Can you keep a secret" talks about identity in a slightly different way. It demonstrates what many teenagers experience when growing up and learning what to do and what not to do. Teenagers are often faced with confusion about identity, particularly their own. This play demonstrates this, with many of the characters knowing inside them that something is wrong but not having the courage to face up to it. Letting others cloud their judgement. " We're like Siamese twins. If one gets hurt the others feel it." Here one of the boys, Chunky, insisting on his loyalty to Sean after he just killed Derek. This sort of attitude, when concerning something as serious as a murder is very naive but is a common problem within teenage problems. The other themes in "Road" include depression, dis-satisfaction with ones life and existentialism. ...read more.