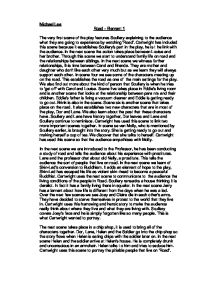 The very first scene of the play features Scullery explaining to the audience what they are going to experience by watching 'Road'.

Michael Lee Road - Element 1 The very first scene of the play features Scullery explaining to the audience what they are going to experience by watching 'Road'. Cartwright has included this scene because it establishes Scullery's part in the play, he is the link with the audience. In the next scene the action takes place between Louise and her brother. Through this scene we start to understand family life on road and the relationships between siblings. In the next scene we witness further relationships, this time between Carol and Brenda. They are mother and daughter who don't like each other very much but as we learn they will always support each other. In scene four we see some of the characters meeting up on the road. This establishes the road as one of the main settings for the play. We also find out more about the kind of person that Scullery is when he tries to 'get off' with Carol and Louise. Scene five takes place in Eddie's living room and is another scene that looks at the relationship between parents and their children. ...read more.

In the next scene we learn of Skin-Lad's conversion to Buddhism. It adds an element of hope to the play, Skin-Lad has escaped his life as violent skin-head to become a peaceful Buddhist. Cartwright uses the next scene to communicate to the audience the living conditions of the people in Road. Scullery ransacks a house thinking it is derelict. In fact it has a family living there in squalor. In the next scene Jerry has a lament about how life is different from the days when he was a lad. Over the next few scenes we see Joey and Claire die in each other's arms. They have decided to starve themselves in protest to the world that they live in. Cartwright uses this harrowing and heroic story to make the audience really think about where they live and what they are living with. Scullery covers Joey's face and he is simply forgotten like so many people. This is what Cartwright wanted to portray. The next scene takes place in a chip shop, it is used to bring all of the characters together. ...read more.

This scene is included because Cartwright wants to show a realistic argument between realistic characters. It isn't too dramatised. They take the argument to the street where Louise, Carol, Eddie and Brink, the main vision of hope in the play, meet for the first time. They shout and argue with Marion and Brian before exiting to Brink's house. Marion shouts at Brian before they go off together. This final scene is very important. It sums up what the play is about. People trying to escape their rotten life. They banter with each other and Eddie and Brink try to get off with Louise and Carol. There is lots of wine and they all end up very drunk. Eddie puts some music on and they all make sombre speeches. Eddie talks about the state of the country and Brink talks about how he feels inside compared to what people see on the outside. Carol talks about poverty and life. Louise talks about fairness and life not being fair. They all end up shouting 'Somehow a somehow I might escape'. This is the theme that runs throughout the play. ...read more.