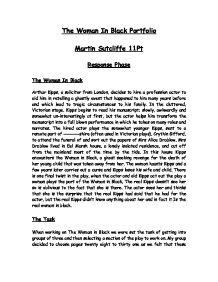 The Woman In Black Portfolio

The Woman In Black Portfolio Martin Sutcliffe 11Pt Response Phase The Woman In Black Arthur Kipps, a solicitor from London, decides to hire a profession actor to aid him in retelling a ghostly event that happened to him many years before and which lead to tragic circumstances to his family. In the cluttered, Victorian stage, Kipps begins to read his manuscript; slowly, awkwardly and somewhat un-interestingly at first, but the actor helps him transform the manuscript into a full blown performance in which he takes on many roles and narrates. The hired actor plays the somewhat younger Kipps, sent to a remote part of ---------shire (often used in Victorian plays), Crythin Gifford, to attend the funeral of and sort out the papers of Mrs Alice Drablow. Mrs Drablow lived in Eel Marsh house, a lonely isolated residence, and cut off from the mainland most of the time by the tide. ...read more.

has come to pick him up. Just as he thinks he will hear it he hears the horse startle, the trap go in the marsh and a small child screaming. He rushes back to Eel Marsh House quickly where he goes around the house putting on every light possible. He does this but comes to a door which will not open so he kicks and punches it and finally sliding to the floor and a deep sleep. He is awoken by the front door and when he opens it he is extremely surprised to see Keckwick, he asks Keckwick about it and Keckwick is oblivious to it and denies all knowledge. Working On The Woman in Black When we were first presented with the task we decided to use a number of explorative strategies to aid us in getting a better understanding of the characters. We decided to use: * Hot Seating - We used hot seating as we felt that if we put the characters in different situations we would be able to interpret their feelings with ease. ...read more.

The mixture of comedy and horror is a difficult task but The Woman In Black manages to achieve this confidently. You do not expect a horror to contain any comedy but the play only implements it in scenes with a lighter mood as not to spoil the tension and horror in the play. The Woman in Black uses the stage extremely well, the stage directions enable the performers to stretch the audiences imagination to the limit without losing any of the quality that the play provides. When we were first given this play my first thoughts that it would be a drab, uninteresting, old play which would not provide enough energy to produce anything with. But after reading through the script I had changed my mind completely, without even seeing a production of the play the suspense and dread that is entwined into the plot together with the stage directions enabled me to visage the entire play. This undoubtedly is a great feat for any play to accomplish. ...read more.