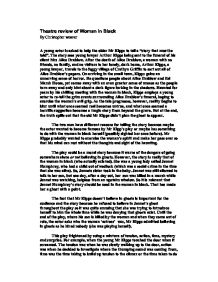 The woman in black

Theatre review of Woman in Black By Christopher weaver A young actor is asked to help the older Mr Kipps to tell a "story that must be told". The story sees young lawyer Arthur Kipps being sent to the funeral of his client Mrs Alice Drablow. After the death of Alice Drablow, a woman with no friends, no family, and no visitors to her lonely, dark home, Arthur Kipps, a young lawyer, travels to the foggy village of Crethyn Griffin to sort out all of Alice Drablow's papers. On arriving in the small town, Kipps gains an unnerving sense of horror. He questions people about Alice Drablow and Eel Marsh House, yet comes away with an even greater sense of unease as the people turn away and only hint about a dark figure lurking in the shadows. Haunted for years by his chilling meeting with the woman in black, Kipps employs a young actor to re-tell the grim events surrounding Alice Drablow's funeral, hoping to exorcise the woman's evil grip. ...read more.

Until the end of the play, where his son is killed by the woman and when they come out of role, the actor asks who the woman 'actress' was, Mr Kipps admitted believing in ghosts as he hired nobody (she was playing herself). This play frightened by using a mixture of tension, action, time, mystery and surprise. For example, when the young Mr Kipps touched the door when it screamed. The tension was when he was slowly walking up to the door, action was when he decided to investigate where the thumping sound was coming from, time was the time taking to build up tension to the climax or the time taken to do a certain action (sound also aids time by making it appear to slow down or speed up i.e. the thumping noise).A good example of mystery was when Mr Kipps was investigating what was behind the nursery door(what was behind it and so on), surprise was used nearly all the time in the play when the woman in black appears(when the surprise factor is used, it makes people jump and makes them want to know what will happen next. ...read more.

Mr Kipps first became an actor when the office scene was set up, which is only a little time before his arrival. However, his style of acting covered a wide range of styles like the melodramatic sniff he did in the office to the rather formal, naturalistic solicitor. Before he started 'acting' though, the young actor gave some tips to Mr Kipps after hearing him read out his script about 10 times. To give it some oomph as he said. Not to say it so dull but to brighten it up with some enthusiasm. To show that the actors were changing into a different character, they both merely turned around and turned back around as a different character and change the way the chosen character moves speaks and even sit. The directors were very subtle about the changing of characters by merely placing in a blackout. It taught me a lot about being a good audience member because it is hard to play 8 or more characters and you have to have respect for the actors so that they have loads of concentration. This theatre review was by Christopher Weaver ...read more.