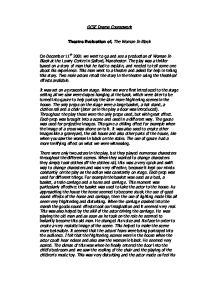 Theatre Evaluation of, The Woman In Black

GCSE Drama Coursework Theatre Evaluation of, The Woman In Black On December 11th 2001 we went to go and see a production of Woman In Black at the Lowry Centre in Salford, Manchester. The play was a thriller based on a story of man that he had to explain, and needed to tell some one about his experience. This man went to a theatre and asked for help in telling this story. Two male actors retold the story in the theatre using the theatrical effects available. It was set on a proscenium stage. When we were first introduced to the stage setting all we saw were drapes hanging at the back, which were later to be turned into gauze to help portray the later more frightening scenes in the house. The only props on the stage were a large basket, a hat stand, a clothes rail and a chair (later on in the play a door was introduced). ...read more.

This moment was particularly effective; the basket was used to take the actor to the house. As approaching the house the horse seemed to become stuck, the use of good sound effects of the horse and carriage, then the use of lighting made this all seem very frightening and disturbing. When the carriage crashed into the marsh the goods sound effects took our imagination and it seemed very real. This was also helped by the skill of the actor driving the carriage. He was playing the old man and as soon as he took on the role he seemed to instantly become this old man. He changed his voice and his face in order to create a very realistic image of the scene. This helped to make the scene more believable. It seemed that the actors' fears were being portrayed into the audience. I felt that the frightening scenes were in the house when the actor could hear noises and also saw the woman in black. ...read more.

She was very effective as a silent actor because this made the audience use our imagination as to what the woman really was, because we never heard her speak. The sound effects, the shrill scream, that accompanied her on the stage also added to the eerie effect. The screams were very shocking and we could feel it in the audience, they became very jumpy and weary of this ghostly apparition on stage. When the play first started it was very slow at taking up the story and did not really grip our attention straight away. But it soon grew in pace and fright, with each scene moving faster and becoming more and more effective in scaring the audience. The effects used in the play, the gauze, the visions, the sounds and the woman really helped in making the play very successful in creating the disturbing feel of the story. I think everyone left the theatre very jumpy, so the play was obviously successful, and I thoroughly enjoyed my fearful experience. ...read more.