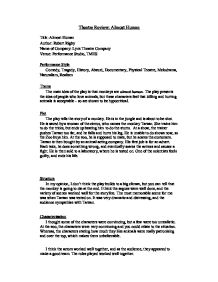 Theatre Review: Almost Human Title: Almost Human Author: Robert Rigby Name of Company: Lynx Theatre Company Venue: Performance Studio, TMHS Performance Style Comedy, Tragedy, History, Absurd, Documentary, Physical Theatre, Melodrama, Naturalism, Realism Theme The main idea of the play is that monkeys are almost human. The play presents the idea of people who love animals, but these characters feel that killing and hurting animals is acceptable - so are shown to be hypocritical. Plot The play tells the story of a monkey. He is in the jungle and is about to be shot. He is saved by a woman of the circus, who names the monkey Tarzan. She trains him to do the tricks, but ends up beating him to do the stunts. At a show, the trainer pushes Tarzan too far, and he falls and hurts his leg. He is unable to do shows now, so the Zoo buys him. At the zoo, he is supposed to mate, but he scares the customers. Tarzan is then bought by an animal acting company. ...read more.

The roles played worked well together. Staging The staging is very affective because it can be used in many different ways for the scenes. The stage was very useful in the play as it didn't take up much space and the actors could move easily around it. Also, it didn't draw attention away from the actors. I didn't think the staging added anything to the atmosphere, but did help you imagine the story better. When the monkey was being tested on, the stage is used as the table on which the monkey is tested on. The audience are drawn to the actors because the space is very open and non-restricting. Costume As the storyline is set in modern-day time, I think the costume worked well. The costume enhanced the images the audience had of characters, even though it was minimal i.e. the doctors in white coats. Technical There was no lighting for the performance. I thought that this was good because it doesn't make the play to unrealistic and therefore more believable. ...read more.

The play affected me in that it backed up my beliefs - I'm a Vegetarian and an Animal Rights Protester. Also, afterwards, many of my friends could understand my opinion easier, and others said they were sorry for taking the pee out of my beliefs!!! I thought that was one of the best things about it! I don't think the company created a particular "world" on stage because I couldn't see how it was modern day, or what era it was in. I think the ideas were good, but I thought of it as made up, not as real life. I wasn't sure what the Director's objective was, but many points were made in the play. I think he was trying to show how similar humans are to apes and that because of that, we shouldn't mistreat them. I thought the production was quite successful, but I didn't really enjoy it. I think the main ideas were good, but I think they only just pulled it off! The many ideas all rolled into one play was good, but made it hard to believe. By Lily Ayre 10KN ...read more.