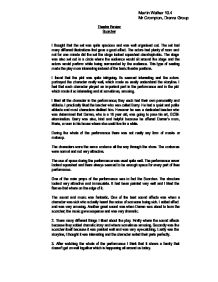 Theatre Review Scorcher I thought that the set was quite spacious and was well organised out. The set had many different illustrations that gave a good effect. The actors had plenty of room and not for one minute did the set the stage looked squashed claustrophobic. The stage was also set out in a circle where the audience would sit around the stage and the actors would perform while being surrounded by the audience. This type of seating made the play more interesting instead of the basic theatre positions. I found that the plot was quite intriguing. Its seemed interesting and the actors portrayed the character really well, which made us easily understand the storyline. I feel that each character played an important part in the performance and in the plot which made it so interesting and at sometimes, amusing. I liked all the character in the performance; they each had their own personality and attitude. ...read more.

Lastly was the storyline, I thought it was interesting and the character suited their parts perfectly. 3. After watching the whole of the performance I think that it shows a family that doesn't get on well together which is happening all around us today. 4.I would not change anything about performance because it was excellent and did not see anything wrong with it. 5. The way I reacted to the characters in the play was that they all used their voices well because everything they said was in the right tone was spoken clearly. Also their movement was excellent and they had rehearsed their parts very well. 6. The two characters that I liked where Darren and Tom/Barry. Firstly, Darren because his use of voice was excellent. He used the right pitch and paused at the right moments. At some points of the play he really had to project his voice in order to get himself heard. ...read more.

Lastly, greed because Cara always thought of herself and what she wanted instead of helping Her brother Darren and her mother, Maria. 10. In conclusion, I think that the Scorcher is a fantastic play that has many ups and down throughout the plot. It has some good characters that are both amusing and serious. It has a good plot that is intriguing and entertaining. The setting is also good as it is always changing because the family ride around to different locations to run their fair. Some of the characters relationships with each other deteriorate like the relationship between Darren and Tom. However on the other hand the relationship between Cara and Tom grows stronger as the story progresses. Some of the props tht are used in the play are very interesting especially the Scorcher itself. It had bright immaculate colours that made it very attractive. Lastly the sounds used where phenomenal. One of the best sounds was when a character was sick. The sound really struck the audience and was very funny. ...read more.