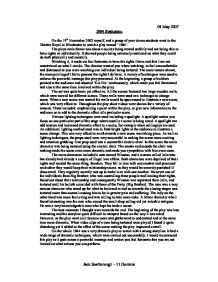 Theatre Royal in Winchester production of '1984'

04 May 2007 1984 Evaluation On the 19th November 2002 myself, and a group of year eleven students went to the Theatre Royal in Winchester to watch a play named '1984'. The plays main theme was about a society being treated unfairly and not being able to have rights or individuality. It showed people being extremely restricted on what they could do both physically and mentally. Watching it, it made me feel fortunate to have the rights I have and that I am not constrained on what I can do. The director wanted you when watching, to feel uncomfortable and distressed as you were watching one individual being tortured. The more torture shown, the more privileged I felt to possess the rights I do have. A variety of techniques were used to enforce the powerful message this play presented. ...read more.

A spotlight can add tension and increased dramatic effect to a scene, for example when soliloquies are used. An additional lighting method used was to flash bright lights at the audience to illustrate a scene change. This was very effective as afterwards a new scene was taking place. As well as lighting techniques, the props used were very successful in making the scene more exciting and attention grabbing. One prop used was a counterfeit electric chair. In this scene the main character was being tortured using the electric chair. The smoke and sounds the chair was making made the scene even more dramatic and made you sympathise with him even more. The main characters included a man named Winston, and a woman called Julia who has already had already a couple of illegal love affairs. Both characters were deprived of their rights and wanted the same thing, freedom. ...read more.

He was a very knowledgeable man who kept his trade a secret. The best moments I thought were towards the end. The beginning of the play was less interesting and the storyline quite difficult to interpret based on the way it was acted. However, as the play went on it became more straightforward to understand and at the same time more dramatic. When video clips of a man being tortured were played I found it quite disturbing yet it added to the effect of the scene making the play improved overall. On the whole 1984 was a very dramatic play to watch with a strong storyline. It had a wide range of dramatic techniques, which were carried out successfully. I would recommend this play as it puts across a powerful message and makes you feel fortunate that you are not limited on what actions you can perform. Jack Scarborough - 11 Dominic ...read more.