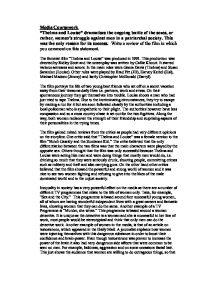 &quot;Thelma and Louise&quot; dramatises the ongoing battle of the sexes, or rather, women's struggle against men in a patriarchal society. This was the only reason for its success. Write a review of the film in which you comment on this statement.

Media Coursework "Thelma and Louise" dramatises the ongoing battle of the sexes, or rather, women's struggle against men in a patriarchal society. This was the only reason for its success. Write a review of the film in which you comment on this statement. The feminist film "Thelma and Louise" was produced in 1991. This production was directed by Ridley Scott and the screenplay was written by Callie Khouri. It starred various actresses and actors. In the main roles were Geena Davis (Thelma) and Susan Sarandon (Louise). Other roles were played by Brad Pitt (JD), Harvey Keitel (Hal), Michael Madsen (Jimmy) and lastly Christopher McDonald (Darryl). The film portrays the life of two young best friends who set off on a secret vacation away from their tiresome daily lives i.e. partners, work and stress. On their spontaneous journey they get themselves into trouble. Louise shoots a man who had just tried to rape Thelma. Due to the incriminating circumstances, they try to escape by making a run for it but are soon followed closely by the authorities including a local policeman who is sympathetic to their plight. The authorities however have less compassion and so a cross country chase is set out for the two fugitives. ...read more.

For example, baldness, aggression and on some occasions facial hair. This just shows the audience that women are willing to do outrageous things, so that they can be equal and win the battle of the sexes. This relates to "Thelma and Louise" as in the film there are a number of battles of the sexes, showing how women have to fight in a patriarchal society and how unequally and unjustifiably they are treated. The issues mentioned above shape the film, as throughout the film the ongoing battle of the sexes is shown. Examples of this are when Thelma and Louise are facing the Truck Driver, this battle brings humour, drama and attention to the film as they are shooting the truck and at the same time are enjoying themselves, the audience sees this by their laughter. The battle between Thelma and her husband Darryl brings a sense of danger as the audience can see how Thelma is being treated unfairly and poorly by her husband. On the other hand the audience can also feel the adventure as they argue continuously, making the audience wonder why Thelma ever married an insensitive man like him and how has she been putting up with him for so long. ...read more.

Another factor that is unique is that it is shot in the middle of the breathtaking scenery of the American Southwest. The film also portrays the strong relationship of friendship and its importance in difficult times. Women may find it easier to connect with Thelma and Louise as it is much easier to connect with the same sex, that is the reason why maybe some men did not appreciate the storyline of the film as they truly did not understand it. Even after Louise murdered Harlan, they both stuck strongly with each other right to the end of the film. The true message of the film is that of friendship and how we all need to stick together no matter what life brings in our way. The script writer Callie Khouri said this about writing "Thelma and Louise," "I wanted to write something that had never been on the screen before." By this statement, I do not think she was very successful in her aim because "Thelma and Louise" was considered to be a copy of the film "Butch Cassidy and the Sundance Kid," making the storyline very similar with just a few minor adjustments and character changes, but basically having the same impact and same plot. Callie Khouri was successful in the fact that she made a good film that did well at the box office and won a number of awards. ...read more.