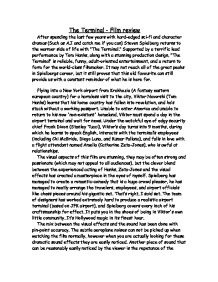 The Terminal - Film review After spending the last few years with hard-edged sci-fi and character dramas (Such as A.I and catch me if you can) Steven Spielberg returns to the warmer side of life with "The Terminal." Supported by a terrific lead performance by Tom Hanks, along with a stunning production design, "The Terminal" is reliable, funny, adult-oriented entertainment, and a return to form for the world-class filmmaker. It may not reach all of the great peaks in Spielbergs career, but it still proves that this old favourite can still provide us with a constant reminder of what he is here for. Flying into a New York airport from Krakhozia (A fantasy eastern european country) ...read more.

Spielberg has managed to create a romantic-comedy that is a huge crowd pleaser, he has managed to neatly arrange the travelers, employees, and airport officials like chess pieces around his gigantic set. That's right, I said set. The team of designers has worked extremely hard to produce a realistic airport terminal (based on JFK airport), and Spielberg covers every inch of his craftsmanship for effect. It puts you in the shoes of being in Viktor's own little community. It's Hollywood magic in its finest hour. The mix between the visual effects and the sound has been done with pin-point accuracy. The subtle aeroplane noises can not be picked up when watching the film normally, however when you are actually looking for these dramatic sound effects they are easily noticed. ...read more.

Spielberg even brings out Pallana's gifts for juggling in a sequence where the janitor tries to entertain Viktor and Amelia on their first date. C'est magnifique! Like everything Spielberg has done recently, "The Terminal" runs a bit too long at 128 minutes. Viktor and Amelia's relationship gets a little too complicated, Frank's tendencies become one-note, and the ending is dragged out to the street and beaten severely as Spielberg goes for the hearts of the viewers a little too obviously. There's a tighter film to be found in "The Terminal," but Spielberg isn't interested in efficiency. What he has here might be flawed, but it's reassuring to see the director return to his roots of character exploration in a fanciful location. My rating: 3/5 ...read more.