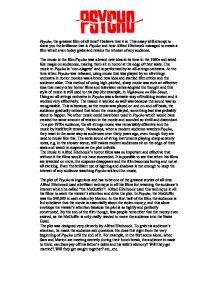 This essay will attempt to show you the brilliance that is Psycho and how Alfred Hitchcock managed to create a film which even today grabs and retains the interest of any audience.

Psycho, the greatest film of all time? I believe that it is. This essay will attempt to show you the brilliance that is Psycho and how Alfred Hitchcock managed to create a film which even today grabs and retains the interest of any audience. The music in the film Psycho was a brand new idea at its time in the 1960s and acted like magic on audiences, making them sit in horror at the edge of their seats. The music in Psycho is 'non-diagetic' and is performed by an all-strings orchestra. At the time when Psycho was released, using music that was played by an all-strings orchestra in horror movies was a brand new idea and startled film critics and the audience alike. This method of using high-pitched, sharp music was such an effective idea that many other horror films and television series adopted the thought and this style of music is still used to this day (for example, in Nightmare on Elm Street. Using an all-strings orchestra in Psycho was a fantastic way of building tension and it worked very effectively. The reason it worked so well was because the sound was so recognisable. This is because, as the music was played on and on-and-off basis, the audience gradually noticed that when the music played, something bad was probably about to happen. ...read more.

All of these sudden changes in plot shock the viewer more and more and make the film more exciting and interesting. Another change in plot is when Sam, Lila, the sheriff and his wife meet after church in broad daylight. This break in the tension allows the viewer to relax and watch a different scene; one in daylight, which is not eerie and in shadow. This may appear to be an odd change in plot, but it helps keep all audiences focused. A very clever ingredient in Psycho, was Alfred Hitchcock's excellent positioning of objects on the film set. Using his complicated knowledge of filming and positioning, he created scenes which convinced the eye of an alteration to the truth. He set objects up, for instance, in the eerie house, which looked so normal and blended in with the film perfectly. He placed typical old-woman-objects in Norman's mother's bedroom to make the audience convinced that there really was an old woman living in the house and that she was still there. He also placed objects such as a toy fire engine and a male dole in Norman Bate's old room to make it suit its part. These little things are actually precisely positioned so that they suit the atmosphere and the audience sub-consciously notices them. ...read more.

Unfortunately it is spoilt on a modern audience as nowadays everyone is so used to graphics and special effects that the stair scene appeared comical to us, as it wasn't realistic. It was quite obvious that there was a film of stairs coming towards the audience being played behind the falling private investigator. The lighting in Psycho was used to great effect and was directed fantastically. Alfred Hitchcock managed to create different atmospheres in different scenes by his use of lighting and shadows. For instance, in the climax scene, when Norman Bates runs into the fruit cellar with a knife, the lighting is fantastic. When the camera turns to look at Norman's mother's wrinkled, mummified face, as the bulb swings creating strobe flashing, in the hollows of her eyes, shadows dance against the inside of her skull which creates an illusion of a mad, mirthful response to the scene before her. Today, Psycho is still looked upon as a brilliant and unique film, which even now manages to grab and retain the interest of any audience. No other film has ever managed to outclass Alfred Hitchcock's masterpiece in complexity or in cleverness. The black and white photography used is perfect for the film's tone and mood - colour would merely have blurred the nightmarish quality. Psycho is an exceptional film, which altered the course of cinematic history, and its brilliance will always be recognised. WEBOGRAPHY NUMBER ADDRESS LAST ACCESSED 1 http://www.filmsite.org/psyc.html 05/01/2003 2 http://www.houseofhorrors.com/psycho.htm 05/01/2003 ...read more.