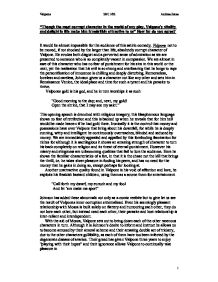 Though the most corrupt character in the world of any play, Valpone's vitality and delight in life make him irresistibly attractive to us&quot; How far do you agree?

"Though the most corrupt character in the world of any play, Valpone's vitality and delight in life make him irresistibly attractive to us" How far do you agree? It would be almost impossible for the audience of this satiric comedy, Valpone not to be moved, if not shocked by the larger than life, absolutely corrupt character of Valpone. He evokes both disgust and a perverted sense of admiration as we are presented to someone who is so completely vacant in compassion. We are almost in awe of this character who has no fear of punishment for his sins in this world or the next, yet the realisation that his evil is so strong and overbearing that he longs to r**e the personification of innocence is chilling and deeply disturbing. Remorseless, loveless and careless, Johnson gives us a character not like any other and sets him in Renaissance Venice, the ideal place and time for such a tyrant and his parasite to thrive. ...read more.

With the aid of Mosca, Valpone sets out to bring down each of the other ravenous characters in turn. Although it is Johnson's desire to inform and instruct he allows us to become amused by their amoral scheme and their amazing double act of trickery, due to the other characters gullibility, as each of them have too been infected by the degenerate disease of avarice. Their greed has given Valpone three years to enjoy "playing with their hopes" and their ignorance allows Valpone to continually take pleasure in " Letting the cherry knock against their lips..." These legacy hunters, aware of the effective threat of each other, bring presents, each trying to outdo the other, naively trusting Mosca as their vector to Valpones treasure. This old Italian tradition encourages such behaviour, and although this play is fictional, it is based on the diseased Italy which was rotten to the core with corruption. In his pretended dying state Valpone lacks the opportunity to show off linguistically, his plan requires Mosca to do his lying and deceiving for him. ...read more.

This is when the laughter stops and the audience is forced to look introspectively at their own moral values. The play narrowly escapes with a "happy" ending, Johnson ensures that no matter how persuading or entertaining the corrupt were, they are punished, full of vitality and life, or not, while the good are absolved. It is not the stereotypical "good overcoming evil" resolve, as neither Celia or Bonario, the only evidence of innocence throughout the play, carried much characteristic weight being two dimensional and shallow. The result is that evil overreaches and destroys itself. Valpone although a mastermind is left to wither away at an asylum, and without his gold to keep him company he his left to rot in his own h**l. The audience was tempted and seduced by his explosive personality and the life that oozed out of him, even when feigning sick. Although hyperbolised and exaggerated he was the emphasis of human folly, we are all to a degree driven by greed, we too are tempted by wrong and dishonesty, and that is the very reason that the character of Valpone appeals to us. Valpone 20/11/02 Andrea Jones 1 1 ...read more.