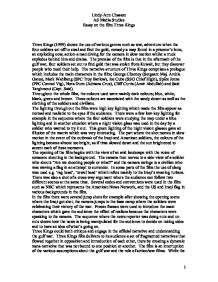 Three Kings (1999) shows the use of various genres such as war, adventure-when the four soldiers set off to steal and find the gold, comedy-a map found in a prisoner's bum, an exploding cow, action-a man diving for the camera in slow motion whilst a truck explodes behind him and drama. The premise of the film is that in the aftermath of the gulf war, four soldiers set out to find gold that was stolen from Kuwait, but they discover people who need their help. The narrative structure of Three Kings comprises a prologue which includes the main characters in the film; George Clooney (Sergeant Maj. Archie Gates), Mark Wahlberg (SFC Troy Barlow), Ice Cube (SSG Chief Elgin), Spike Jonze (PFC Conrad Vig), Nora Dunn (Adriana Cruz), Cliff Curtis (Amir Abdullah) and Said Targhmoui (Capt. Said). Throughout the whole film, the colours used were mainly dark colours; blue, white, black, green and brown. These colours are associated with the sandy desert as well as the clothing of the soldiers and civilians. The lighting through out the film were high key lighting which made the film appear as normal and realistic to the eyes if the audience. There were a few low-key lighting for example in the sequence where the four soldiers were studying the map under a blue lighting and in another situation where a night vision glass was used in the day by a soldier who wanted to try it out. ...read more.

Three Kings film delivers to its audience a set of fragmented narratives that flowed together in opposition and introduction of each other, there by creating a dynamic meta-narrative that was not bound to one position or another. The film is an interruption of the various assumptions about the gulf war and the role of action/war films. While the film is about four soldiers stealing gold, there is a message of morality over reputation that is at the ending of the film they ended put being heroes. The camera shots and movements are done superbly e.g. the noise of a helicopter and the voices of two soldiers speaking could be heard in the background and then the camera then rolls onto the helicopter taking off in slow motion, sending sand and capsizing a chair. The cultural verisimilitude of the film attracts audience to the film because the film gives some connection and feel to the real. The flashbacks are also done remarkably for example, in the scenario where Gates speaks to the soldiers about their day jobs and the phone rings giving the flashback of each soldiers(Troy, Conrad and Elgin) comes into place. There were also flash backs of Troy Barlow's family and what could have happen to them, as well as Capt. ...read more.

At this point the film allows for the possibility of the audience to remove expectations of America, American patriotism, winning the gulf war or defending freedom to be the "most important thing in life." The answer Gates delivers to the audience allows for the most important thing to be the individual. Before the heist begins, Archie Gates tells his American soldiers cohorts that they will conduct their robbery without firing any shots. When he was queried, he detailed both verbally and visually the result of a bullet entering the body. This dialogue sets the pace in which scenes of violence will be treated. Throughout the course of the film, each scene involving violence, is approached with a variety of techniques. In some scenes, the film slows down to show each shot fired and when the bullet hits; in other scenes, specific use of graphic close-up shots are used to illustrate the effect of the bullet. When violence was a probability in the scene, the camera begins to use close-up shots of all of the guns that would be involved if violence erupts. The film was edited in a way that the sound of a gun shot sounded natural. Techniques such as these begin to afford the audience time to process violence that is being portrayed. Lindy-Ann Chasson AS Media Studies Essay on the film Three Kings 1 ...read more.