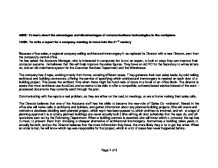 To learn about the advantages and disadvantages of communications technologies in the workplace. TASK: To write a report for a company wanting to move into the 21st century

AIMS: To learn about the advantages and disadvantages of communications technologies in the workplace TASK: To write a report for a company wanting to move into the 21st century Because of low sales, a regional company selling architectural ironmongery has replaced its Director with a new Director, sent from the company's central office. He has asked the Accounts Manager, who is interested in computers but is not an expert, to look at ways they can improve their computer systems. He believes that this will help improve the sales figures. They have an old PC for the Secretary to writes letters on, and an old mainframe system for the Customer Services Department and the Warehouse. The company has 5 reps, working mostly from home, covering different areas. ...read more.

Communicating with the reps is a real problem, as they are either on the road, in meetings, or are at home making their sales calls. The Director believes that one of the Accounts staff has the skills to become the new role of 'Sales Co-ordinator'. Based in the office she will make calls to architects and builders, and gather information about any planned building projects. She will create and maintain a database detailing each planned project, which rep it has been passed to, which architect is involved, and what stage of planning approval it is at (many planned buildings are never actually built.) She will log all door schedules that the reps do, and all quotations sent out by the Estimating Department. ...read more.

that will help the Accounts Manager make his proposal to the Director describing how communications technologies described in the lesson might help improve their sales. Try to be detailed, and clear why you are making a suggestion - remember it is for the Accounts Manager, who is not a computer expert and so should be able to understand it. Describe the current situation first, and what you would replace it with. Say why your suggestion is an advantage, and also why it might be a disadvantage. To help you structure your answer, concentrate first on the Sales Reps, then on the new role of Sales Co-ordinator, and then on the other departments in turn. One thing to note: the Director intends to pay for the changes by making redundant the worst-performing rep. By Joseph Morris Page 2 of 3 ...read more.