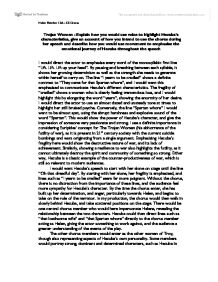 Trojan Women - Explain how you would use voice to highlight Hecuba's characteristics, give an account of how you intend to use the chorus during her speech and describe how you would use movement to emphasise the emotional journey of Hecuba throughout the

Trojan Women - Explain how you would use voice to highlight Hecuba's characteristics, give an account of how you intend to use the chorus during her speech and describe how you would use movement to emphasise the emotional journey of Hecuba throughout the speech I would direct the actor to emphasise every word of the monosyllabic first line "Lift. Lift. Lift up your head". By pausing and breathing between each syllable, it shows her growing determinism as well as the strength she needs to generate within herself to carry on. The line "I yearn to be cradled" shows a definite contrast to "They came for that Spartan whore", and I would want this emphasised to communicate Hecuba's different characteristics. The fragility of "cradled" shows a woman who is clearly feeling tremendous loss, and I would highlight this by elongating the word "yearn", showing the enormity of her desire. I would direct the actor to use an almost dazed and unsteady tone at times to highlight her still bruised psyche. Conversely, the line "Spartan whore" I would want to be almost spat, using the abrupt harshness and explosive sound of the word "Spartan". This would show the power of Hecuba's character, and give the impression of someone very passionate and strong. ...read more.

They would be looking down to the floor, holding themselves, and sitting down, curled up, such as is shown within Hecuba in the line "I yearn...to cry unending tears, bemoaning a song of sorrow". By showing these different characters within the chorus, and linking to Hecuba's own personality, the audience can see the wide variety of people affected by the war, further emphasising its futility. Greater sympathy is also created for Hecuba from the audience as they are able to understand more about her mixed emotions. Feeling this compassion increases the likelihood of them questioning the play's themes within their own lives; particularly important in the social and political climate of the 21st century. At the very start of the speech, I would want Hecuba to be sitting centre stage, cross-legged and holding her knees, looking down. Here, this would show the beginning of her emotional journey, starting very low, like her morale. Holding herself shows the need for security, and the desire "to be cradled". When she says "Lift" for the final time in the opening line, I would want the actor playing Hecuba to look up, delivering the rest of the line directly to the audience. This builds an immediate connection between the audience and the character, evoking sympathy. ...read more.

We would see the despair she feels at her loss, as well as the very real anger she feels towards Helen. Like so many wars, then and throughout history, it revolved around one individual, emphasising the senselessness of so many people joining one argument. From the mention of Helen to "An old woman burdened with grief", I would direct the actor playing Hecuba to walk slowly, but with purpose towards the audience, showing her change in energy, and resolute tone. Her character now seems far more strong-minded, and instead of ordering herself as she did earlier in the speech "Lift up your head", she is now ordering the women of Troy: "Come. Come out." She even addresses the audience "Pity me", linking directly to their already developing process of catharsis. I would want the actor to use sharp, sudden and passionate hand gestures here, reaching out to the audience, particularly on the line: "But not! No!", emphasising her anger. This is the climax of her emotional state, and a complete contrast to the Hecuba we see at the start. There is never a sense of learning though, or a sense of gain from her experience. Even when she is sitting or kneeling, I would never want to portray her as truly giving up, as her constant struggle shows the continuous circle of revenge, and lack of wisdom through experience. Helen Fletcher 13A - CS Drama ...read more.