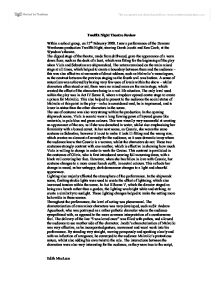 Twelfth Night Theatre Review Within a school group, on 12th February 2009, I saw a performance of the Donmar Warehouse production Twelfth Night, starring Derek Jacobi and Ron Cook, at the Wyndam's theatre. The dipped stage of the theatre, made from driftwood, gave the appearance of a worn down floor, such as the deck of a boat, which was fitting for the beginning of the play when Viola and Sebastian are shipwrecked. The actors remained on the main raised stage at all times, which helped to create a boundary between them and the audience - this was also effective at moments of direct address, such as Malvolio's monologues, as the contrast between the previous staging as the fourth wall was broken. A sense of naturalism was achieved by having very few uses of levels within the show - whilst characters often stood or sat, there were no raised areas on the main stage, which created the effect of the characters being in a real life situation. The only level used within the play was in Act IV Scene II, where a trapdoor opened centre stage to create a prison for Malvolio. ...read more.

However, when she has fallen in love with Cesario, her costume changes to a more casual beach outfit, in neutral colours. This reflects her change in mood, as her unhappy, dark demeanour changes to a light and cheerful appearance. Lighting also majorly affected the atmosphere of the performance. In the shipwreck scene, flashing strobe lights were used to create the effect of lightning, which also increased tension within the scene. In Act II Scene V, which the director staged as being on a beach rather than a garden, the lighting was bright white and striking, to create a similarity to sunlight. These lighting changes helped to make the setting more believable in these scenes. Throughout the performance, the level of acting was phenomenal. The characterisation of even minor characters was very developed, such as Sir Andrew Aguecheek, who was portrayed as a rather pathetic character whom the audience sympathised with, as opposed to the more common interpretation of a cumbersome fool. The delivery of the line "I was loved once" was filled with pathos, and allowed the audience to see another side of the character. ...read more.

The director used many different devices to make the production differ from the common interpretation of the text. By including an all-male dance scene in Orsino's household, the pace of the performance at that point was increased, and also added an aspect of comedy, by including Cesario (a woman in disguise) into the dance. The director also interpreted Feste in an unusual way, in Act IV Scene II, where he pretends to be Sir Topas; he had the actor cartwheel to different parts of the stage when swapping between his own persona and that of Sir Topas. This also created an element of comedic dramatic irony, as it showed the audience how Feste was teasing Malvolio, who was unaware of his trickery. It was obvious when watching the performance from the surrounding audience's reaction that it was a complete success. The jokes made both from the script and interpretations, were received with raucous laughter, and in moments of tension, such as the unveiling of Viola's true identity, the hushed silence of the audience spoke for itself. As a production of a classic text and also a modern interpretation of themes of relationships and illusion, it was exceptional, and it is a performance I would love to see again and again. Edith MacLean ...read more.