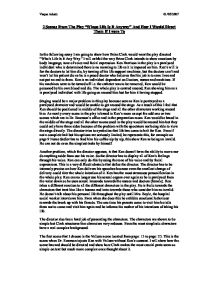 Two scenes from the play &quot;Whose Life Is It Anyway&quot; and how I would direct them.

2 Scenes From The Play "Whose Life Is It Anyway" And How I Would Direct Them If I were To In the following essay I am going to show how Brian Clark would want the play directed "Who's Life Is It Any Way." I will exhibit the way Brian Clark intends to show emotions by body language, tone of voice and facial expression. Ken Harrison in the play is a paralysed individual who is determined there is no meaning to life as it is imposed on him. Ken's will is for the doctors to let him die, by turning of his life support machines, but the doctors can't and won't let his patient die as he is a proud doctor who believes that his job is to save lives and not put an end to them. Ken is an individual dependent on Doctors, nurses and machines. If his machines were to be turned off i.e. the catheter was to be removed, Ken would be poisoned by his own blood and die. The whole play is centred around, Ken showing him as a is paralysed individual with life going on around him but for him it having stopped. Staging would be a major problem in this play because seen as Ken is portrayed as a paralysed character and would be unable to get around the stage. As a result of this I feel that Ken should be positioned in middle of the stage and all the other characters working around him. As nearly every scene in the play is based in Ken's room except the odd one or two scenes which are in Dr. Emerson's office and in the preparation room. Ken would be based in the middle of the stage and all the other rooms used in the play would be around him but they could only have three sides because of the problem with the spectators not being able to view the stage directly. ...read more.

.Well, you aren't due for it until twelve o'clock. We'll see . . . ." Ken makes a comical remark saying if you don't whether to take a tranquilliser sleep on it. At this point the director would cool down the atmosphere, which has arisen between them. The director now makes Ken look for sympathy from Dr. Scott because he asks her to go and tell Dr. Emerson that I don't want the Valium and I don't need it. He wants her to help him put an end to the Valium. Dr. Scott leaves the rooms and tells Sister that she hasn't given the Valium to ken yet and pursuing this she alters his notes. This section of the play concerns Nurse Sadler and John. "NURSE SADLER is taking kidney dishes and instruments out of the steriliser. John creeps up from behind her and seizes her round the waist. Nurse Sadler jumps, utters a muffled scream and drops a dish". John jokes around with Nurse Sadler and gives his perspective of the hospital. He says that the hospital is an ante-room of the morgue (a place where you go before you go to the morgue). He doesn't say this in a serious manner but in a comical manner. Nurse Sadler debates this, she says that there is Mr. Trevellyan who is being released tomorrow. John again replies with a comical comment "After his third heart attack! I hope they give him a return ticket on the ambulance." Nurse Sadler starts to act seriously, she says to him "Would you let them die? People like Mr. Harrison?" At this point John informs Nurse Sadler of a fact "In Africa children die of measles. It would cost only a few of pounds to keep them alive. There's something crazy somewhere" They argue for a while and then I guess John gets a little bored of the arguing and starts to joke around again. ...read more.

Prior to this, Ken states that the only thing that he still has the right to claim to use was his consciousness. At this point he also loses this right to it because more than one occasion Ken tells Dr. Emerson not to inject him with needle and he still does. And to top it all off he doesn't explain to him in even slightly in depth. Clark builds up to the climax of the scene from page 13. As Dr. Emerson enters the room he does not make eye contact or speak with Ken he goes straight for his arm. Any good director would have Dr. Emerson enter the room coolly and injects him with the needle. Even when he speaks to Ken, The director would have Dr. Emerson concentrating on Ken's arm or the syringe. The scene finishes with Ken going to sleep (...ken is frustrated and then his eyes close). The second section I chose what the court case. As the Valium section was the climax of its act the court case is the climax of act two and the whole play. The preparation for the court case actually starts from page 37 but the actual court case starts on pages 66/67. I will mainly concentrate on the actual court case but I will also refer back to other pages. I will start on pages 37 and describe the case briefly. The act starts with Sister introducing Mr. Hill (the lawyer). The incentive of Mr. Hill's visit was to try to get some compensation for Ken from the accident. He comes in and starts briefing Ken on their position and this point Ken informs Mr. Hill the genuine reason of his visit. The reason which, Ken requests the call upon of Mr. Hill was because he wants Mr. Hill to get him discharged from the hospital. He convinces Mr. Hill to go to Dr. Emerson and persuade him to let him go. Mr. Hill goes to Dr. Emerson but after numerous topics about Ken's condition discussed Ken's wish was not granted but a physiatrist Vaqas Aslam 01/05/2007 ...read more.