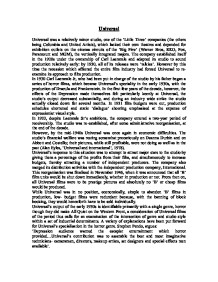 Universal Universal was a relatively minor studio, one of the 'Little Three' companies (the others being Columbia and United Artists), which lacked their own theatres and depended for exhibition outlets on the cinema circuits of the 'Big Five' (Warner Bros, RKO, Fox, Paramount and MGM), the vertically integrated majors. The company established itself in the 1920s under the ownership of Carl Laemmle and adapted its studio to sound production relatively early: by 1930, all of its releases were 'talkies'. However by this time the recession which affected the entire film industry had forced Universal to re-examine its approach to film production. In 1930 Carl Laemmle Jr, who had been put in charge of the studio by his father began a series of horror films, which became Universal's speciality in the early 1930s, with the production of Dracula and Frankenstein. ...read more.

In 1933, despite Laemmle Sr's ambitions, the company entered a two-year period of receivership. The studio was re-established, after some administrative reorganisation, at the end of the decade. However, by the mid-1940s Universal was once again in economic difficulties. The studio's financial welfare was resting somewhat precariously on Deanna Durbin and on Abbott and Costello; their pictures, while still profitable, were not doing as well as in the past (Alan Eyles, 'Universal and international', 1978). Universal's response to this situation was to attempt to attract major stars to the studio by giving them a percentage of the profits from their film, and simultaneously to increase budgets, thereby attracting a number of independent producers. ...read more.

on the Western Front, a consideration of Universal films of the period thus calls for an examination of the intersection of genre and studio style within a set of industrial determinants. A variety of explanations have been put forward for Universal's specialisation in the horror genre. Stephen Pendo, argues: 'Depression audience wanted the escapist entertainment which horror provided...Universal's contribution was to assemble the best and most imaginative technicians- cameramen, directors, makeup artists, set designers and special effects men available'. Of all the Hollywood studios, Universal is probably best known for introducing the American public to horror. Founded by Carl Laemmle and under the watchful eye of, Irving Thalberg, the studio produced several classic silent films with Lon Chaney Sr. The studio had a resurgence in horror interest in the early 1930s. ...read more.