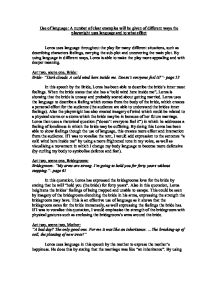 use of language blood wedding

Use of language: A number of clear examples will be given of different ways the playwright uses language and to what effect Lorca uses language throughout the play for many different situations, such as describing characters feelings, carrying the sub-plot and uncovering the main plot. By using language in different ways, Lorca is able to make the play more appealing and with deeper meaning. Act two, scene one, Bride: Bride- "Dark clouds. A cold wind here inside me. Doesn't everyone feel it?"- page 53 In this speech by the Bride, Lorca has been able to describe the bride's inner most feelings. When the bride states that she has a "cold wind here inside me", Lorca is showing that the bride is uneasy and probably scared about getting married. Lorca uses the language to describe a feeling which comes from the body of the bride, which creates a personal effect for the audience (the audience are able to understand the brides inner feelings). ...read more.

Act two, scene two, Mother: "A bad day? The only good one. For me it was like an inheritance. ...The breaking-up of soil, the planting of new trees!" Lorca uses language in this speech by the mother to express the mother's happiness. He does this by stating that the marriage was like "an inheritance". By using the word inheritance in this way to describe the marriage, Lorca has been able to refer to the marriage as a gain, which shows the mothers view. This therefore is an effective use of language as it expresses a characters view. In this quotation, Lorca also describes the marriage as "the breaking-up of soil, the planting of new trees!" which gives the impression that the marriage is the start of something new. This quotation can also show the repetition in the play; due to the cycle of planting of trees and soil being broken up. In this quotation, the playwright has been able to manipulate the audience into believing that the marriage is more like a process by using language effectively. ...read more.

This is an effective use of language as it again shows imagery. Also Lorca has shown that the tears are precious as he has stated that they come from the roots of the mother. This shows that Lorca has used language to show the mothers emotions, which is effective for the audience. Throughout the play, Lorca uses different styles of language to express different ways the bride talks to the bridegroom, Leonardo and the maid. For instance, the bride treats the characters differently, such as treating the maid as if she owns her, therefore imposing her authority and instructing her what to do. The bride treats the bridegroom as if she is trying to avoid communication with him and being as abrupt as possible. However the bride communicates her feelings with Leonardo as well as showing passion and l**t when speaking to him. Lorca's style of writing is expressed in his use of poetry. When expressing the lullabies Lorca uses romance and passion which shows that his style of writing helps the poem and play flow. ...read more.