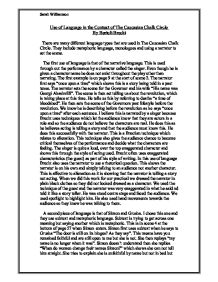 Use of Language in the Context of The Caucasian Chalk Circle

Use of Language in the Context of The Caucasian Chalk Circle By Bertolt Brecht There are many different language types that are used in The Caucasian Chalk Circle. They include metaphoric language, monologues and using a narrator to set the scene. The first use of language is that of the narrative language. This is used through out the performance by a character called the singer. Even though he is given a character name he does not exist throughout the play other than narrating. The first example is on page 9 at the start of scene 2. The narrator first says "once upon a time" which shows this is a story being told in a past tense. The narrator sets the scene for the Governor and his wife "His name was Georgi Abashvilli". The scene is then set telling us about the revolution, which is taking place at this time. He tells us this by referring to deaths "a time of bloodshed". ...read more.

He was stood centre stage and faced the audience. We used spotlight to highlight him. He also used hand movements towards the audience so they knew he was talking to them. A second piece of language is that of Simon and Grusha. I chose this one and they use subtext and metaphoric language. Subtext is trying to get across one meaning but saying another which is metaphoric. This is in scene 4 at the bottom of page 57 when Simon enters. Simon first uses subtext when he says to Grusha "The door is still on its hinges? As they say". This means have you remained faithful and are still open to me but she is not. She then replays "my name is no longer when it was". Simon doesn't understand then she replies "When do women change their names Simon?" which shows she can not tell him straight. She tries to explain she is unfaithful by name but not in bed but Simon fails to understand this and then sees Michael. ...read more.

She says She then says "don't throw yourself in at the front line". This is referred to Simon Chachava as she wants him to come home to her. She then says gives tips of how she wants Simon to fight so he comes home to he "in front is red fire, in the rear is red smoke, stay wisely in between, as the first ones always die and the last ones are also hit, those in the centre come home". She then talks to Michael in a monologue. In this monologue she says to Michael that they much make themselves "really small, like cockroaches". This is a metaphor to how she feels as she feels small and wants to escape the fact that the sister-in-law does not want her there. She then tells Michael not to "cry because of the cold" as "being poor and cold as well puts people off". She says this as she doesn't want to look poor and wants to be respected as a person with a child without being questioned all the time. ?? ?? ?? ?? Sarah Williamson ...read more.