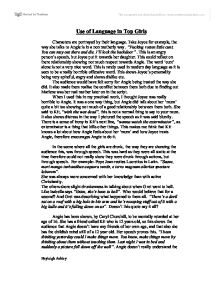 use of language in top girls

Use of Language in Top Girls Characters are portrayed by their language. Take Joyce for example, the way she talks to Angie is in a non motherly way. "f*****g rotten little c**t. You can stay out there and die. I'll lock the backdoor". This is an angry person's speech, but Joyce put it towards her daughter. This could reflect on there relationship showing not much respect towards Angie. The word 'c**t' alone is not a very nice word. This is rarely used in modern day language as it is seen to be a really horrible offensive word. This shows Joyce's personality being very spiteful, angry and shows dislike etc. The audience would have felt sorry for Angie being treated the way she did. It also made them realise the conflict between them both due to finding out Marlene was her real mother later on in the script. When I used this in my practical work, I thought Joyce was really horrible to Angie. ...read more.

"Suave, mari mango turbantibus aequora ventis, e terra magnum alterius spectare laborem". She was always more concerned with her knowledge than with active Christianity. The others show slight drunkenness in talking about when Gret went to h**l. Like Isabella says "listen, she's been to h**l". Who would believe that for a second? And Gret was describing what happened to them all. "There's a devil sat on a roof with a big hole in his a**e and he's scooping stuff out of it with a big ladle and it's falling down on us". Doesn't this quote say it all? Angie has been shown, by Caryl Churchill, to be mentally retarded at her age of 16. She has a friend called Kit who is 12 years old, so this shows the audience that Angie doesn't have any friends of her own age, and that also she has the childish mind still of a 12 year old. ...read more.

When actually someone would care. Caryl has used stars (*), hyphens (-) and forward slashes (/) in the speech of everyone in top girls. This makes the scrip seem like a natural conversation as the forward slashes stand for interrupting. It wouldn't seem naturalistic if there was a pause after each line. The conversation would be lost and it wouldn't flow. The stars stand for a topic of conversation that has been carried on. The forward slashes are mostly used in conflict between two characters. For example- Joyce: "Angie, / you're getting silly." Angie: "I want to be American." Joyce: "its time you were in bed." Angie: "no it's not. / I don't have to go to bed at all tonight." Joyce: "school in the morning." It is used mostly for interruptions, and to make a point, as Joyce has made here to Angie as she is meant to be in bed as its late getting late, and she has school in the morning. And the hyphens are where someone just carries on their next line, whilst someone else is speaking. ?? ?? ?? ?? Hayleigh Ashley ...read more.