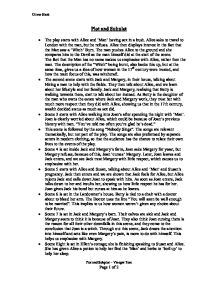 Plot and Subplot * The play starts with Alice and 'Man' having s*x in a bush. Alice asks to travel to London with the man, but he refuses. Alice then displays interest in the fact that the Man saw a 'Witch' Burn. The man pushes Alice to the ground and she compares him to the Devil as the man himself did at the start of the scene. The fact that the Man has no name makes us emphasise with Alice, rather then the man. The description of the "Witch" being burnt, also backs this up, but at the same time, gives us a idea of how women in the 17th century were treated, and how the main focus of this, was witchcraft. * The second scene starts with Jack and Margery, in their house, talking about Hiring a man to help with the fields. They then talk about Alice, and we learn about her lifestyle and her family. Jack and Margery, realising that Betty is walking towards them, start to talk about her instead. As Betty is the daughter of the man who owns the estate where Jack and Margery work, they treat her with much more respect then they did with Alice, showing us that in the 17th century, wealth decided status as much as s*x did. ...read more.

They also think Joan cursing them is the reason for all their other downfalls in this scene, and they come to the conclusion that Joan is a witch. Through out this scene, Jack draws the attention into himself and acts like even Margery's pain, is more to do with himself. This helps us emphasize with Margery. * Scene Eight is set in Ellen's cottage; she is finishing speaking to Susan and Alice. She has given Alice a potion to help her find the 'Man' and herbs to 'boil up' to help her sleep. * Scene 9 is again set in Ellen's cottage. Betty is talking to Ellen about how she is to be married. Betty clearly doesn't want to be married. Ellen tells Betty that the best she can do is help her sleep, as she will not help Betty hurt the man she is to marry. * Scene 10 is also set in Ellen's cottage. Jack and Margery are talking to Ellen about how they think Joan is a witch. They are trying to get re-insurance from her so that they can accuse Joan of being a witch. ...read more.

Ellen is also scared that someone will accuse her of being a witch. This scene shows the audience of the fear put into the two women. * Scene 17 is set inside a prison. Alice is tied up and Goody is watching her. Alice is more concerned about her son then her own life. When a spider is seen by Packer, He accuses it of being Alice's 'imp'. * Scene 18 is again set in the prison. Goody is looking for 'The devil's mark' on Susan's body. Joan then confesses to being a witch, and obviously has given up trying to escape her death. * Scene 19 is set in the public square. Joan and Ellen are hung, While Margery prays. * Scene 20 is set in the public square again. Joan and Ellen are still hanging. Susan has been convinced that she is a witch herself, But Alice still denies it. * Scene 21 is completely different to the rest of the play which creates contrast and makes this scene stand out. Sprenger and Kramer, 2 New characters, speak together about witches and how it is more common to be a witch if you are female. ?? ?? ?? ?? Oliver Slark Plot and Subplot - Vinegar Tom Page 1 of 2 ...read more.