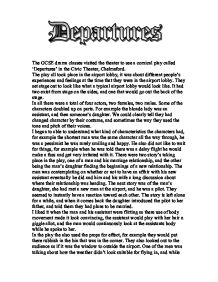 Visit to a comical play called &amp;#145;Departures&amp;#146; in the Civic Theater, Chelmsford.

The GCSE drama classes visited the theater to see a comical play called 'Departures' in the Civic Theater, Chelmsford. The play all took place in the airport lobby, it was about different people's experiences and feelings at the time that they were in the airport lobby. They set stage out to look like what a typical airport lobby would look like. It had two exist from stage on the sides, and one that would go out the back of the stage. In all there were a total of four actors, two females, two males. Some of the characters doubled up on parts. For example the blonde lady was an assistant, and then someone's daughter. We could clearly tell they had changed character by their costume, and sometimes the way they used the tone and pitch of their voices. I began to able to understand what kind of characteristics the characters had, for example the shortest man was the same character all the way through, he was a pessimist he was rarely smiling and happy. ...read more.

I liked it when the man and his assistant were flirting as there use of body movement made it look convincing, the assistant would play with her hair n giggle allot, and the man would continuously look at the assistants body while he spoke to her. In the play the also used the props for effect, for example they would put there rubbish in the bin that was in the corner. They also looked out to the audience as if it was the window to outside the airport. One of the men was talking about how the weather didn't look suitable for flying in, and while saying it he'd look out, as if he was looking out of a window at the planes. One of the men often used one-line jokes that would change the mood of the play from sad to happy and visa-versa. He'd often use bad language when he heard bad news, which made it seem more realistic and more humorous. ...read more.

They also used sound affects in the play. As the characters walked off to their plane, a sound of a plane would be made. When they were in the lobby they used the sound affects to create that there were being flights called, and the characters would reply to it wondering what the flights actually were. At the beginning of every new scene they played music of the theme of the supposed lobby location, or example at on point they were in a lobby in Mexico and at the start of the scene the played a Mexican style song. This was good as it indicated when scenes started and finished, and it also helped us understand where this scene was taking place. I quite liked the play and thought it was quite funny, I think if I had to re-create the play myself, I would have chosen to have more than one stage setting. It did get a bit confusing trying to understand on whether they are in the same place as before or another lobby somewhere else in the world. Ollie Westrup ...read more.