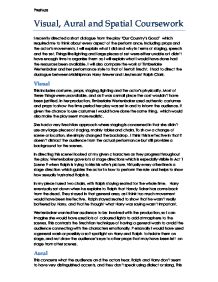 Visual, Aural and Spatial Coursework I recently directed a short dialogue from the play 'Our Country's Good' which required me to think about every aspect of the performance, including props and the actor's movements. I will explain what I did and why in terms of staging, speech and the set. Things like lighting and large pieces of set were either unable or I didn't have enough time to organise them so I will explain what I would have done had the resources been available. I will also compare the work of Timberlake Wertenbaker and her performance style to that of Bertolt Brecht. I had to direct the duologue between Midshipman Harry Brewer and Lieutenant Ralph Clark. Visual This includes costume, props, staging, lighting and the actor's physicality. Most of these things were unavailable, and as it was a small piece the cost wouldn't have been justified. In her production, Timberlake Wertenbaker used authentic costumes and props to show the time period her play was set in and to inform the audience. ...read more.

This contrasts the Brechtian technique of having a general wash to avoid the audience connecting with the characters emotionally. Personally I would have used a general wash or possibly a soft spotlight on Harry and Ralph to isolate them on stage, and not draw the audience's eye to other props that may have been left on stage from other scenes. Aural This concerns what the audience and the actors hear. Ralph and Harry don't seem to have very distinguished accents, and they don't speak using dialect or slang. This helps to demonstrate the fact that they are officers and were probably educated when they were in England. I had Ralph use a very sarcastic, uninterested tone, except for the line: 'Don't speak her name on this iniquitous shore!' For this line I had Ralph almost shouting but he pulls back as if he's made a mistake. Harry is obsessed with Duckling and, after this outburst, changes the topic of conversation to her as if Ralph hadn't said anything. ...read more.

It is more than likely that Wertenbaker would have used the whole of the stage, possibly using different parts of it to show different periods of time. This is a Brechtian technique, developed to keep production simple. The audience was end on, which gave them a single perspective of the performance. I watched the rehearsals from several angles, and neither of my performers blocked the other so they could be seen by everyone at all times. It would have been a harder task if the audience was in a round, as this would mean I would have to make more use of the entire stage to ensure that their backs aren't always facing one part of the audience. Overall I think my piece was quite well directed, but given the chance to do it again with a different duologue I would probably change the fact that the actors didn't move around the stage. Telling them to use the space more effectively might engage the audience a bit more but it is important not to have too much movement or they won't concentrate on what the actors are saying. ?? ?? ?? ?? Preshuss ...read more.