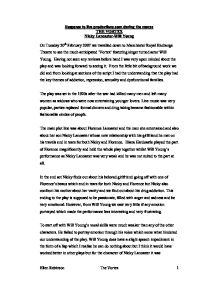 Response to live productions seen during the course THE VORTEX Nicky Lancaster-Will Young On Tuesday 20th February 2007 we travelled down to Manchester Royal Exchange Theatre to see the much-anticipated 'Vortex' featuring singer turned actor Will Young. Having not seen any reviews before hand I was very open minded about the play and was looking forward to seeing it. From the little bit of background work we did and from looking at sections of the script I had the understanding that the play had the key themes of addiction, repression, sexuality and dysfunctional families. The play was set in the 1920s after the war had killed many men and left many women as widows who were now entertaining younger lovers. Live music was very popular, parties replaced formal dinners and drug taking became fashionable within fashionable circles of people. The main plot line was about Florence Lancaster and the men she entertained and also about her son Nicky Lancaster whose new relationship with his girlfriend he met on his travels end in tears for both Nicky and Florence. Diana Hardcastle played the part of Florence magnificently and held the whole play together whilst Will Young's performance as Nicky Lancaster was very weak and he was not suited to the part at all. ...read more.

Which sounded like he was just saying in a normal voice and was not interested in the play at all. Will Young's worst line of the play was when he had found out Bunty and Florence's Beau had been kissing. Will Young says 'I'm straining to keep under control' but indeed it didn't look or sound like he was straining. He said it like he would if he was talking to someone in the park. There was no feeling behind it. I am not sure whether it could be to do with poorly structured rehearsals and the team not giving him guidance or whether it is purely down to the fact Will Young struggles to act well at all. Whatever the reason it was certainly a very poor performance. Physically he was also nowhere near as strong as the other actors. He flounced across the stage instead of entering and exiting the stage with meaning. He was very stiff moving around the stage and looked very tense and was not at all relaxed. He didn't look natural or at ease on the stage. It looked as though it was a real struggle for him and indeed for the audience it became a real struggle to watch. ...read more.

He flounced on and off the stage with no motives and what seemed like no purpose. It is possible some of this could have been down to poor direction but even if direction was lacking it is essential he thinks for himself and decides what each line is meaning and why he is doing actions instead of just half-heartedly doing them. He needed to think about what his character was like, how Nicky would react to people and different situations, Nicky's relationships and his drug addiction. The ending of the play didn't feel like an end and we were left wanting more not because it was good but because we wanted and end to close the play so we could go away and forget all about. Will Young is trying to establish himself as an actor but this is a very poor start and I think he was completely miss cast for this role, but the company may have thought putting him in it and advertising he was in it would help bring in the large audiences. This was a fatal error and also an error for Will Young. In my view Will Young is not ready for professional plays and frankly people shouldn't have to watch a potentially fantastic play ruined by one actors painful performance. Ellen Robinson The Vortex 1 ...read more.