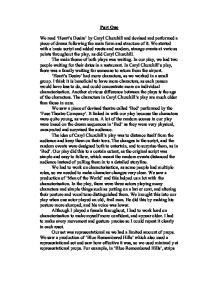 We read 'Heart's Desire' by Caryl Churchill and devised and performed a piece of drama following the main form and structure of it.

Part One We read 'Heart's Desire' by Caryl Churchill and devised and performed a piece of drama following the main form and structure of it. We started with a basic script and added resets and random, strange events at various points throughout the play, as did Caryl Churchill. The main theme of both plays was waiting. In our play, we had two people waiting for their dates in a restaurant. In Caryl Churchill's play, there was a family waiting for someone to return from the airport. 'Heart's Desire' had more characters, as we worked in a small group. I think it is beneficial to have more characters, as each person would have less to do, and could concentrate more on individual characterisation. ...read more.

The idea of Caryl Churchill's play was to distance itself from the audience and keep them on their toes. The changes in the script, and the random events were designed both to entertain, and to surprise them, as in 'Bed'. Our play did this to a certain extent, as the original script was simple and easy to follow, which meant the random events distanced the audience instead of pulling them in to a detailed storyline. We had to work on characterisation, as some people had multiple roles, so we needed to make character changes very clear. We saw a production of 'Men of the World' and this helped us a lot with the characterisation. ...read more.

Our set was representational as we had a limited amount of props. We saw a production of 'Blue Remembered Hills' which also used a representational set and saw how effective it was, so we used minimal yet representational props. For example, in 'Blue Remembered Hills', strips of cloth were used to represent trees and in our play a wooden screen was used to represent a toilet cubicle. Our play relied on music to determine the resets, and in a way this is similar to the production of 'Bed' as during the dream sequences, they used different music to distinguish the random scenes that weren't part of the actual script. Another similarity between our play and 'Bed' was the target audience. They were both aimed at the younger generation, relying mainly on humour. However, teenagers can relate to the serious issues raised in both plays. ...read more.