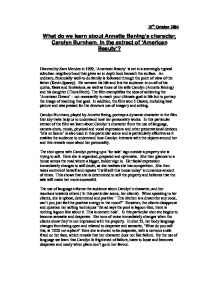 What do we learn about Annette Bening's character, Carolyn Burnham, in the extract of 'American Beauty'?

15th October 2004 What do we learn about Annette Bening's character, Carolyn Burnham, in the extract of 'American Beauty'? Directed by Sam Mendes in 1999, 'American Beauty' is set in a seemingly typical suburban neighbourhood that gives an in depth look beneath the surface. An ordinary, financially well-to-do family is followed through the point of view of the father (Kevin Spacey). He narrates his life and lets the audience in on all of his quirks, flaws and limitations, as well as those of his wife Carolyn (Annette Bening) and his daughter (Thora Birch). The film exemplifies the idea of achieving the 'American Dream' - not necessarily to reach your ultimate goal in life but to portray the image of reaching that goal. In addition, the film won 5 Oscars, including best picture and was praised for the directors use of imagery and editing. Carolyn Burnham, played by Annette Being, portrays a dynamic character in the film. Her key traits help us to understand how her personality works. ...read more.

When speaking to her clients, she is upbeat, determined and positive ' This kitchen is a dream for any cook, can't you just feel the positive energy in the room?" However, the clients disapprove and question her selling techniques 'the ad says the pool is lagoon-like, there is nothing lagoon like about it. This is cement hole'. In this particular shot she begins to become sarcastic and desperate. Her tone of voice immediately changes when the clients show they're not impressed with the property. In shot 25, her body language changes from being open and relaxed to desperate and sarcastic, 'What do you call this, is THIS not a plant!' Here she is shown to be desperate, with a nervous smile fixed on her face, which reveals that her character does not like failure. By the use of language we learn that Carolyn Is frightened of failure, hates to loose and becomes desperate and needy when plans don't go in her favour. ...read more.

Moreover, Annette Bening's acting techniques contribute to revealing Carolyn's true personality. She plays Carolyn dramatically and can control her characters mood swing effectively. For example, she was unsuccessful in selling the property and at the end of the scene she breaks down, calling herself a 'baby' and 'weak'. Here she could be seen as unstable. This suggests that despite being able to control her emotions in front of the clients she punishes herself for failing. Through Annette Bening's acting techniques we learn that there are almost two sides to Carolyn's personality: the positive, determined, optimistic side that she only lets her clients see, and the child-like side that cannot handle failure disappointment or imperfection. In conclusion, Carolyn is obsessive, perfectionist and cannot handle pressure or failure. We receive this information about Carolyn through the different camera shots, acting techniques and presentational devices. These devices are so efficient that the audience can portray Carolyn's personality in seconds, whilst the different shots are being played. They also help the audience to comprehend and understand how her personality works and what her true character is really like. ...read more.