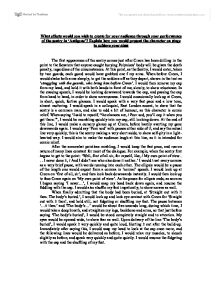 What effects would you wish to create for your audience through your performance of the sentry in 'Antigone'? Explain how you would present the character on stage to achieve your aims

What effects would you wish to create for your audience through your performance of the sentry in 'Antigone'? Explain how you would present the character on stage to achieve your aims The first appearance of the sentry comes just after Creon has been drilling in the point to the Senators that anyone caught burying Polynices' body will be given the death penalty, regardless of the circumstances. At this point, as the Sentry, I would enter, taken by two guards; each guard would have grabbed one f my arms. When before Creon, I would shake both arms sharply, to get the soldiers off as they depart, shown in the text as 'struggling with the guards, who bring him before Creon'. I would then remove my cap from my head, and hold it with both hands in front of me, slowly, to show reluctance. In the ensuing speech, I would be looking downward towards the cap, and passing the cap from hand to hand, in order to show nervousness. I would occasionally look up at Creon, in short, quick, furtive glances. I would speak with a very fast pace and a low tone, almost muttering. I would speak in a colloquial, East London accent, to show that the sentry is a common man, and also to add a bit of humour, as this character is comic relief. When saying 'I said to myself, "the chances are, / Poor sod, you'll cop it when you get there."', I would be mumbling quickly into my cap, still looking down. ...read more.

During the speech, I would use role-play to show the audience both how the sentry wants to dissociate himself from it all, and also to add more comic relief. For example, I would say 'One of us lot must tell the King, / Because we can't just hide it, can we!' in a different voice; I would speak it in a higher pitch and tone, a variation on the same accent, to add humour and show that the sentry is mocking his fellow soldier. I would also do a comic turn at this point; I would step aside, and face the opposite direction, as if talking to where I had previously been; this would show that I would be the sentry playing another character more clearly, and also provide a comic effect for the audience. When Creon makes his large, angry speech, I would crouch down, bending my knees and back, keeping my hands close to my body. I would then creep, with slow but long paces backwards away from Creon. I would head stage right, towards a side-door, as if trying to get out. This would show the audience that I wanted to leave quietly, emphasising my reluctance to be there. I would do this silently, looking at Creon cautiously, and slowly bending my knees and back lower and lower as I edge away. When Creon says 'You! Come Here!', I would scamper back towards him; I would remain low, and move with very small, quick steps, like an insect, scurrying across the stage. ...read more.

'case closed'; this would show the audience that the sentry has a great deal of daring and confidence at this point, and wishes to end the line of conversation. In the aside following Creon's exeunt, I would relax again, and face the audience with body side-on, facing stage right, but head turned to face the audience. I would intend for the audience to see that I, the sentry, would be very eager to leave, and want to scarper quickly. To show this, I would speak very quickly, and in a low tone and in a stage whisper, as I would be addressing the audience, not the characters on stage. For example, when saying 'I've had an amazing stroke of luck, / And won't chance my arm a second time!', I would speak it with a fast pace, and a very slight pause given by the comma and the line break in the text. I would also rub my hands together rapidly with glee on the line 'I've had an amazing stroke of luck', and then hold my right arm a few inches above the elbow with my left arm when saying 'I won't chance my arm', to give a visual representation. I would then run offstage with quick, medium-length steps to show my hurry to leave; I would begin running at the word 'second', so the word time would be drawn out slightly, as I would finish the word as I was offstage. This furtive aside and exeunt would create an effect showing haste, giving a comic effect to the audience, to provide comic relief. ...read more.