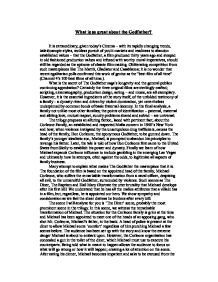 What is so great about the Godfather?

What is so great about the Godfather? It is extraordinary, given today's Cinema - with its rapidly changing trends, kaleidoscopic styles, reckless pursuit of youth markets and readiness to abandon established values - that the Godfather, a film produced thirty years ago and steeped in old fashioned production values and infused with worthy moral imperatives, should still be regarded as the epitome of classic film making. Obliterating competition from such masterpieces like The Matrix, Gladiator and Casablanca; it is no wonder that recent egalitarian polls confirmed this work of genius as the "best film of all time" (Channel 4's 100 best films of all time.). What is the secret of The Godfather saga's longevity and the general publics continuing approbation? Certainly the three original films are sterlingly crafted; scripting, cinematography, production design, acting - and music, are all exemplary. However, it is the essential ingredients of the story itself, of the unfolded testimony of a family - a dynasty riven and driven by violent domination, yet nevertheless underpinned by common bonds of basic fraternal decency. ...read more.

The foundation of the film is based on the appointed head of the family, Michael Corleone, who suffers the remarkable transformation from a naval officer, despising all evil, to the unmerciful Godfather, surrounded by violence. Such scenes as The Diner, The Baptism and Hail Mary illustrate the utter brutality that Michael develops after his first kill. We understand that he has all the malice attributes that a villain has in a film, but, regardless, he is appointed our hero. We show sympathy and consideration as we feel the sheer distress he burdens after every kill. The scene I will analyze for you is 'The Diner' scene, probably the most prominent scene in the trilogy. In this scene, we witness the remarkable transformation of Michael. The situation for the Corleone family is grim at the time and Michael has been appointed to meet one of the heads of an apposing gang, who shot Mr. Corleone, Michael's father, in the back. A head of police is present at the diner to allow Michael some 'comfort' regardless of him punching Michael a few scenes before. ...read more.

This is called non-diegetic sound, creating mood and atmosphere. There is no music, but the train noise shows the frustration and conflict in Michaels mind. As he returns, the train noise builds again until he shots. This noise has an influence on the audience as well because they appreciate that Michael does not mean for this to happen; it is merely uncontrollable. Before long this has dreadful consequences. Michael must flee America to avoid the police and soon tastes revenge. If the story is at the heart of The Godfather, then the lifeblood stemming from that is in the acting. Marlon Brando's status as possibly America's leading vintage actor has remained confirmed through the decades in no small part due to the Godfather. Marlon Brando was given a fitting funeral in 2004 when Radio 1 put The Godfather soundtrack on in his memory. Al Pacino, Robert De Niro and Andy Garcia all launched their careers; with Robert De Niro often seen as the epitome of Italian-American acting. For many decades, The Godfather has dominated the top 100 films and it is almost inevitable that it will never be surpassed and will continue to do so forever. ...read more.