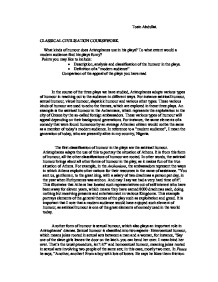 What kinds of humour does Aristophanes use in his plays? To what extent would a modern audience find his plays funny?

Tosin Abdullai. CLASSICAL CIVILISATION COURSEWORK. What kinds of humour does Aristophanes use in his plays? To what extent would a modern audience find his plays funny? Points you may like to include: * Description, analysis and classification of the humour in the plays. * Definition of a "modern audience" Comparison of the appeal of the plays you have read In the course of the three plays we have studied, Aristophanes adopts various types of humour in reaching out to the audience in different ways. For instance satirical humour, s****l humour, visual humour, slapstick humour and various other types. These various kinds of humour are used to echo the themes, which are explored in these three plays. An example is the satirical humour in the Acharnians, which represents the exploitation in the city of Greece by the so-called foreign ambassadors. These various types of humour will appeal depending on their background generations. For instance, the same elements of a comedy that were found humorous by an average Athenian citizen would not be the same as a member of today's modern audience. In reference to a "modern audience", I mean the generation of today, who are presently alive in my country, Nigeria. The first classification of humour in the plays are the satirical humour. Aristophanes adapts the use of this to portray the situation of Athens. ...read more.

The verbal humour used in his plays are represented by puns, tragic parody, sarcasm, irony and his ability to create a few words of his own of a humorous nature. The puns in his plays make evident, his knowledge of many words and his understanding of their meaning, as he is skilfully able to put them together to give a comic effect. For example, "Very agreeable too it must be, especially if there's also music". This is a pun as in the Greek, the misunderstanding is based is based on the similar sound of the words peinames, 'we go' and pinomes, 'we drink'. The ironies in Aristophanic comedy are also built in a structure that brings about comic effect. An example is when Trygaeus travels all the way to heaven on his dung beetle to secure peace for the Athenians to deliver his offerings rather than the normal procedure of sacrificing on earth and praying that it would be recognized. Sarcasm, which means an ironic comment intended to hurt a person, is also evident in Aristophanes' plays. For example, "O mighty hero Lamachus! What crests, what cohorts!" Tragic parody is another element of verbal humour that is very hilarious. This form of verbal humour mocks the true seriousness and skill of the language of tragedies. For example, "Thou'lt rob me of the whole d**n tragedy! ...read more.

This means a boisterous form of comedy marked by chases and collisions. Aristophanes makes this evident in the course of the three plays we study. From my point of view, this form of humour can be considered as a division of visual humour as it has to do the actions of people. An example of slapstick humour is "hastily drops to the ground. Procleon follows him down, but Xanthias seizes him and uses him as a shield". The main factor that would determine whether a Nigerian would find slapstick humour funny depends mainly on the quality of the presentation of this form of humour and the ability to keep it limited and not too much. In conclusion, the creative works of Aristophanes present him as a commendable playwright, considering the age or century to which he belonged. Through this he is able to win over my support in agreeing that he is a great writer. On the other hand, his presentation of an excessively opened sexuality is an aspect of his work, which will be disapproved by most Nigerians. I also think that Aristophanes ability to still present his opinions through his characters, despite the use of heavy comedy portrays him as very contemporary, as that is popular amongst many political satire playwrights. For example, Wole Soyinka, who is popularly known in Nigeria as a political satire playwright. I therefore think that that the extent to which Aristophanes' plays are seen as humorous depends on each individuals view on various factors, such as your cultural background and ability to communicate with the audience. ...read more.