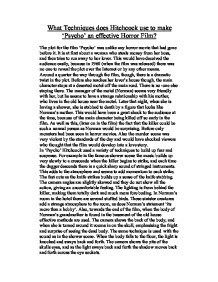 What Techniques does Hitchcock use to make 'Psycho' an effective Horror Film?

What Techniques does Hitchcock use to make 'Psycho' an effective Horror Film? The plot for the film 'Psycho' was unlike any horror movie that had gone before it. It is at first about a woman who steals money from her boss, and then tries to run away to her lover. This would have deceived the audience easily, because in 1960 (when the film was released) there was no one to reveal the plot over the Internet or by any other means. Around a quarter the way through the film, though, there is a dramatic twist in the plot. Before she reaches her lover's house though, the main character stops at a deserted motel off the main road. There is no-one else staying there. The manager of the motel (Norman) seems very friendly with her, but he seems to have a strange relationship with his mother, who lives in the old house near the motel. ...read more.

This adds to the atmosphere and seems to add momentum to each strike. The fast cuts as the knife strikes builds up a sense of the knife stabbing. The camera angles are slightly skewed and they do not show all the action, giving an uncomfortable feeling. The lighting is from behind the killer, making them totally dark and much more foreboding. In Norman's room in the hotel there are several stuffed birds. These sinister creatures add a strange atmosphere to the room, as does Norman's statement 'its more than a hobby'. Also, towards the end of the film, when the body of Norman's grandmother is found in the basement of the old house effective methods are used. The camera shows the back of the body, and when she is turned around it zooms in on the skull, emphasising the fright and surprise of seeing the dead body. ...read more.

Also people may drift in and out of watching a movie on TV or video but Hitchcock insisted that if anyone missed the start of the film they were not to be allowed into the cinema, as he felt that his film was not complete without the beginning. So 'Psycho' has lost a large amount of its effect over the years. My personal view of 'Psycho' is that it is an excellent film, especially for the time when it was made. Hitchcock is obviously an exceptional and special director, and he was doing things in film which had never been done before, and crossing lines in what was acceptable in society. Even today 'Psycho' is a superb and stirring film, action packed and surprising, so in its time it must have been an amazing and stunning experience, which would have made a lot of people think. For example it was the first film that showed that the guy next door could be a killer. ...read more.