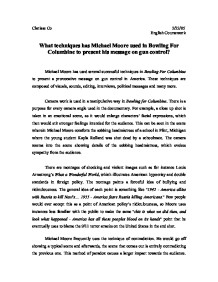 What techniques has Michael Moore used in Bowling For Columbine to present his message on gun control?

Clarisse Co 2/22/05 English Coursework What techniques has Michael Moore used in Bowling For Columbine to present his message on gun control? Michael Moore has used several successful techniques in Bowling For Columbine to present a provocative message on gun control in America. These techniques are composed of visuals, sounds, editing, interviews, political messages and many more. Camera work is used in a manipulative way in Bowling for Columbine. There is a purpose for every camera angle used in the documentary. For example, a close up shot is taken in an emotional scene, as it would enlarge characters' facial expressions, which then would stir stronger feelings intended for the audience. This can be seen in the scene wherein Michael Moore comforts the sobbing headmistress of a school in Flint, Michigan where the young student Kayla Rolland was shot dead by a schoolmate. The camera zooms into the scene showing details of the sobbing headmistress, which evokes sympathy from the audience. There are montages of shocking and violent images such as for instance Louis Armstrong's What a Wonderful World, which illustrates American hypocrisy and double standards in foreign policy. ...read more.

Societies and countries and governments do things that annoy one another but we have to learn to deal with that annoyance or anger or frustration in appropriate ways. We don't get irritated with somebody and just cuz we're mad at em, uh, drop a b**b or shoot at em - or fire a missile at em" and what comes right after it when Moore immediately fades into this brief scene as if to say "Oh really??" and proving quite the opposite with persuasive success in the following scene illustrating the aforementioned What a Wonderful World montage. Often times the music that is played in the background clashes with the visuals shown on screen. There is juxtaposition between the serious images or visuals and the harmonious melody. The irony makes the audience feel disturbed in what they are seeing quite unparallel to what they are hearing hence leaving a greater impression in their minds. There is more to reality than just ecstasy. An example of this is the montage of people being murdered by guns, and the jolly vocalist John Lennon is singing Happiness is a Warm Gun in the background. ...read more.

Moore's accordance with the rocker makes a good image out of Manson- a pretty intelligent and witty rocker. In sharp contrast to Bowling for Columbine's sycophantic and bootlicking interview of Marilyn Manson, the climactic interview finishing off the movie with the National Rifle Association President Charlton Heston is a sham. The audience is left to thinking that Charlton Heston is insensitive, ignorant, r****t and foolish. What Michael Moore did was set Charlton Heston up in a series of traps with dishonest presumptions that he has already tricked his audience with. The viewer, bringing these presumptions with them into the scene, gets a nasty impression of Heston's comments. Michael Moore has used these techniques effectively succeeding equally well in presenting the message on gun control/violence in America. Although some may argue that there are a lot of lies behind the "facts" that Moore uses to prove his ideas, he is skillful enough that some of the readily- impressionable viewers don't realize that they are being fooled. Therefore, he has successfully persuaded the audience about the lacks gun control policy in America and its consequences. ...read more.