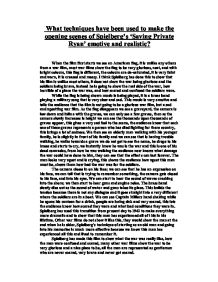 What techniques have been used to make the opening scenes of Spielberg's 'Saving Private Ryan' emotive and realistic? When the film first starts we see an American flag, it is unlike any others from a war film, most war films show the flag to be very glorious, neat, and with bright colours, this flag is different, the colours are de-saturated, it is very faint and worn, it is creased and messy. I think Spielberg has done this to show that his film is unlike most others, it does not show the war being glorious and the soldiers being brave, instead he is going to show the real side of the war, how horrible of a place the war was, and how scared and confused the soldiers were. While the flag is being shown music is being played, it is a brass band playing a military song that is very slow and sad. This music is very emotive and tells the audience that the film is not going to be a glorious war film, but a sad and upsetting war film. As the flag disappears we see a graveyard, the camera is low down and inline with the graves, we can only see a few graves, then as ...read more.

shoot them still, in other movies they would not have done this, they would have taken them prisoner and not hurt them. When Captain Miller and his men are in the boat, it appears as if a handheld camera is being used to film, it moves freely around the boat and shakes when the boat hits the waves, this gives the audience a feel of what the soldiers were going through when they were in the boat. When the boats go onto the beach we get a view of the German guns from there point of view, we can see them shooting down American soldier like they mean nothing, the audience gets to see from this how men were just shot down without thought. A view of the enemies guns is not usually done in war films but in this film it is a crucial part of the beach scene as it shows the amount of men that were taken from there families without any thought of care. Through the whole beach scene very dull de-saturated colours are used, everything is grey, green, black or other dark colours. ...read more.

These two scenes also show that the soldiers were just ordinary people who were scared; these scenes show the character of Captain Miller and help the audience build up a mental relationship with Captain Miller. The more of a relationship they feel they have with him the more they will feel for him. The brass band from the beginning starts to play, the audience will get the feeling that peace is once again and the fighting has stopped. The overall affect of this scene is sadness and unhappiness, the audience is expected feel that the soldiers went through a lot for there country and how bad it was for them. The techniques that make this section of the film emotive and realistic are the close up shots were people are scared and confused, the brass band playing before and after the fighting, when the fighting scene is over the camera moves over all the dead soldiers lying on the beach, they are motionless and covered in blood, we then see S.Ryan on the film, the audience can tell he his dead and the scene for the rest of the film has been set. By Thomas Price ...read more.