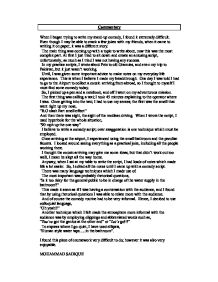 When I began trying to write my stand-up comedy, I found it extremely difficult. Even though I may be able to crack a few jokes with my friends, when it came to writing it on paper, it was a different story.

Commentary When I began trying to write my stand-up comedy, I found it extremely difficult. Even though I may be able to crack a few jokes with my friends, when it came to writing it on paper, it was a different story. The main thing was coming up with a topic to write about, now this was the most complex part. At first I just tried to sit down and create an amusing script, unfortunately, as much as I tried I was not having any success. In my practice scripts, I wrote about Pets to old Grannies, and even my trip to Pakistan, but it just wasn't working. ...read more.

The first thing was calling a taxi; I took 45 minutes explaining to the operator where I was. Once getting into the taxi, I had to use my senses; the first was the smell that went right up my nose, "B.O slash Fart smell effect" And then there was sight, the sight of the reckless driving. When I wrote the script, I used hyperbole for the whole situation, "90 mph up the one way" I believe to write a comedy script; over exaggeration is one technique which must be employed. Once arriving at the airport, I experienced using the small bathroom and the peculiar faucets. I looked around seeing everything as a practical joke, including all the people working there. ...read more.

This made it seem as if I was having a conversation with the audience, and I found that by using rhetorical questions I was able to relate more with the audience. And of course the comedy routine had to be very informal. Hence, I decided to use colloquial language, "Oh yeah!!" Another technique which I felt made the atmosphere more informal with the audience was by employing clippings and abbreviated words such as, "You've got the genius at the other end" or "Let's go!!!" To express where I go quiet, I have used ellipsis, "Human style water taps.....in the bathroom". I found this piece of coursework very difficult to do; however it was also very enjoyable. MOHAMMAD SADIQUE ...read more.