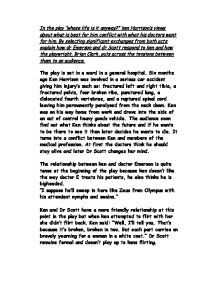 In the play "whose life is it anyway?" ken Harrison's views about what is best for him conflict with what his doctors want for him. By selecting significant exchanges from both acts explain how dr Emerson and dr Scott respond to ken and how the playwright, Brian Clark, puts across the tensions between them to an audience. The play is set in a ward in a general hospital. Six months ago Ken Harrison was involved in a serious car accident giving him injury's such as: fractured left and right tibia, a fractured pelvis, four broken ribs, punctured lung, a dislocated fourth vertebrae, and a ruptured spinal cord leaving him permanently paralysed from the neck down. Ken was on his way home from work and drove into the side of an out of control heavy goods vehicle. The audience soon find out what Ken thinks about the future and if he wants to be there to see it then later decides he wants to die. ...read more.

Later Ken and Dr Scott talk about why Ken should or shouldn't take the prescribed vallium. One minute they're serious and Ken explains his point of view clearly. But after that Ken is back to using his sense of humour and in the film he says to Dr Scott "that's what I always say if ever in doubt whether or not to take a tranquillizer, sleep on it." This shows that they are starting to communicate well with one another. Dr Scott responds well to this humour she shows this by laughing with him, she seems comfortable around him. At the point in the play when Doctor Emerson gives ken an injection of Valium, the audience can tell that the relationship between them has completely broken down. After doctor Scott's visit to ken, doctor Emerson saw ken later in his room doctor Emerson gave ken the vallium when he was at his most vulnerable and without his consent. ...read more.

At this point in the play Ken uses humour and intelligence to win the fight for his right to die. Brian Clark makes the characters seem very realistic. The use of lighting at the end of the film might suggest the end of Ken's life. I don't think an audience would expect Ken to change his mind at the last minute because he has carried his argument through against his doctors. An audience might not like Dr Emerson although they respect his professionalism they would prefer Dr Scott because she is kind hearted but she also let her personal feelings get in the way of doing her job at more than one point in the play. The play seems very realistic and if it were to happen in reality then Euthanasia would become legal in this country. I think Euthanasia should become legal in this country in some cases such as elderly people that can't take the pressure of surgery or people in ken's position that want to die. ...read more.